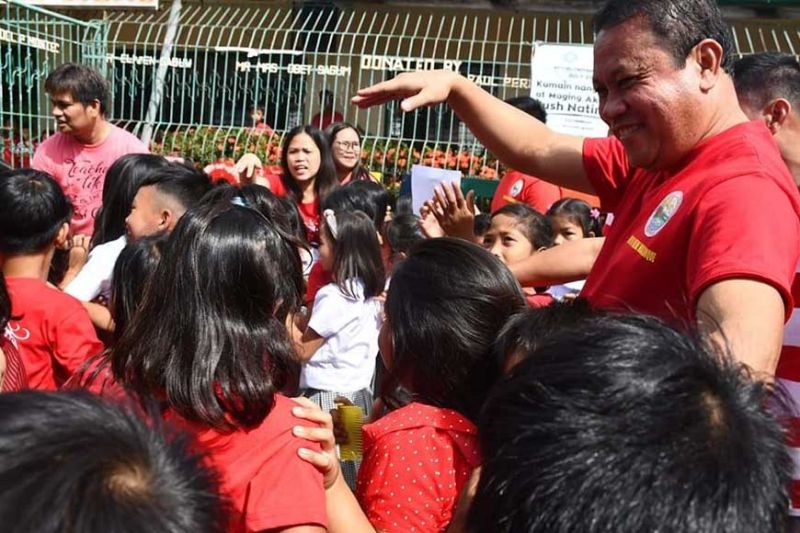 PAMPANGA. Mayor Rene Maglanque is welcomed by students of San Agustin Elementary School where he celebrated his birthday. (Contributed photo)

IT WAS Candaba Mayor Rene Maglanque's birthday on Tuesday, February 11, but students from different elementary schools were the ones who received treats.

As early as 8 a.m. Tuesday, Maglanque went off to visit the public elementary schools in Barangays Paligue, San Agustin, Sto. Rosario, Gulap, Magumbali and Salapungan to bring joy and gifts to the students.

Accompanied by the Jollibee mascot, Maglanque distributed meals to over 500 students in the school during the whole-day activity.

Students were also treated to a dance performance of the trending "Tala" music by the Jollibee mascot and municipal councilors.

According to Maglanque, he opted to celebrate his birthday with Candabeño students to bring smiles to them, their parents and teachers.

"Seeing the innocent faces of children painted with smiles from the simple treats we bring is more than a birthday gift to me. It feels like I was also transported to my younger days when I studied and played in the streets of Candaba," he said.

Maglanque expressed gratitude to the faculty of each school he visited for sparing some time to celebrate his birthday with him.

He also thanked his fellow local officials and municipal employees for joining him on his special day.