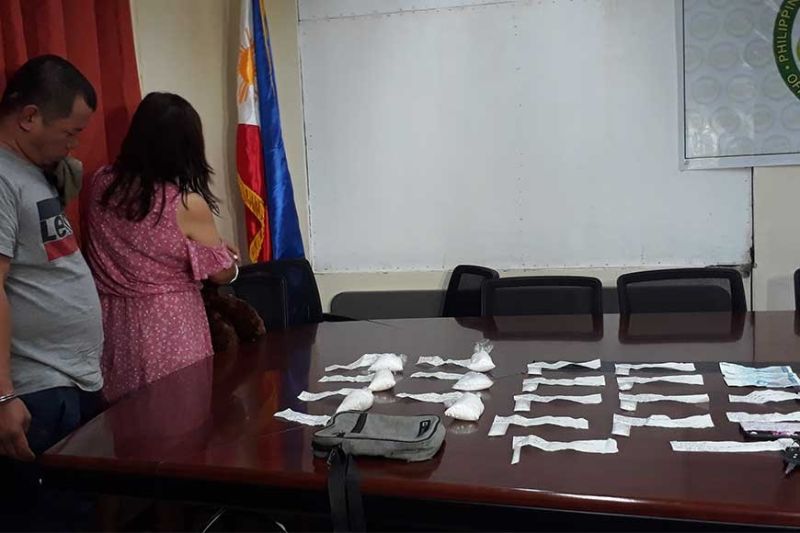 VALENTINE’S Day was supposed to be Bembol Rabosa Papata and Jeanet Narcelo Saicon’s wedding day but instead of exchanging vows, the couple was locked up in jail after they were arrested in a drug bust.

Papata, in an interview, said they are scheduled to wed on February 14 in their hometown in Mabini in a Muslim ceremony when authorities arrested them during an illegal drug transaction. He said they were in Tagum City to send an invitation while his partner had her hair done in a salon.

Papata added he had spent around P25,000 to P30,000 for the wedding preparation which he allegedly saved from his sideline as a miner in Kapalong when things messed up.

Aside from the couple, also arrested was Rex Comaña, 28, and a resident of Visayan Village.

The operation pushed through when a poseur buyer successfully purchased one piece elongated plastic sachet of suspected shabu (methamphetamine hydrochloride) from alias Bimbol, Saicon and alias Kevin in exchange of P3,000.

The estimated street market value of purchased and confiscated illegal drug items from the suspects is P9,440,000, with an estimated weight of 590 grams, which is now in police office custody while cases for violation of RA 9165 are now being prepared for filing against the suspects through summary inquest procedure.

This is the biggest amount of drugs yielded by authorities in the region which is allegedly sourced from Marawi City.

Papata is considered the Top 7 Provincial Most Wanted Drug Personality in Davao De Oro and is also under the Directorate for Intelligence Drugs Watchlist.

“The arrest of the suspects will paralyze, if not terminate, the circulation of illegal drugs within Davao City, Davao del Norte and Davao de Oro as his patrons are mostly retailers in different areas within the aforesaid city and provinces,” DCPO Director Police Colonel Kirby John Kraft said.

Papata has been under surveillance after drug peddlers in Davao City identified him as their source. Upon learning the information, authorities have launched the monitoring which led to his apprehension.

Meanwhile, Papata insisted that he does not know that he was carrying illegal drugs. But authorities did not buy his excuse after he was caught in action.

In 2015, Papata was already arrested but was released last year through plea bargaining.