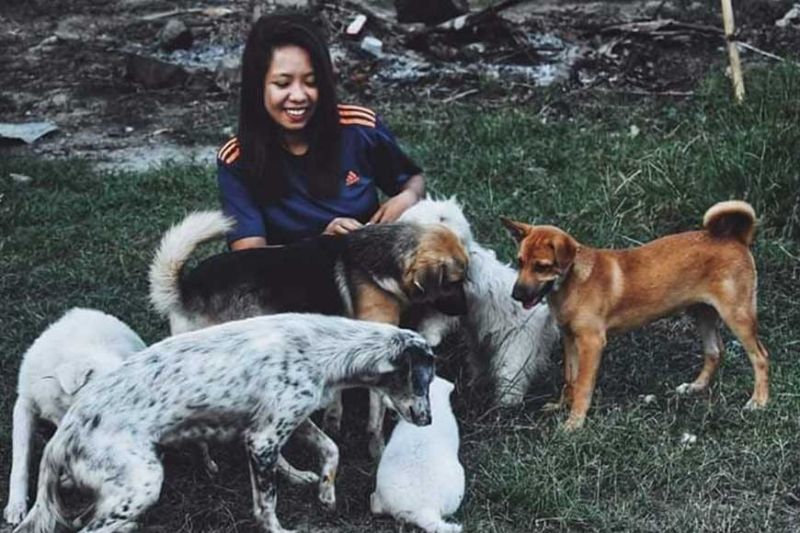 IT IS undeniable that humans and animals have a symbiotic relationship since time of creation.

As Ecclesiastes 3:19 reads, “For the fates of both men and beasts are the same: As one dies, so dies the other — they all have the same breath. Man has no advantage over the animals, since everything is futile.”

Humans, being the high-ranking species and rational ones, have the capability to defend themselves. The animals, on the other hand, are voiceless by nature, making them more vulnerable to abuses.

She used to be an executive assistant and a social media administrator to different firms. But she gave it all up to advocate for animal rights.

Their online posts of different rescued stray animals influenced netizens to be more compassionate towards animals. The page currently has more than 30,000 followers.

“Nobody knows me on Pet Avenue. Everybody thinks Ginggay is the founder,” she shared. Being an introvert, she would rather stay away from the limelight.

Her two dogs eventually led her towards her advocacy.

Born and raised in Tacurong City, Sultan Kudarat, she had her first dog name Sparkplug, a Mal-Shih, a crossbreed between a Maltese and a Shih Tzu.

“Hindi ko maintindihan paano kami nagkakaintindihan, pero I feel secured kahit anliit niya (I cannot describe our mutual connection despite our differences. Also, I feel secure despite her being so small) becasuse I live alone in my house,” she said.

Her unexplainable connection with Sparkplug led her to actively engage in different Facebook dog lover groups, wanting to understand more about her furry friend.

Her other dog, Brian, an Aspin or Asong Pinoy, is a rescued dog. She saw Brian in a trash can dumped along its dead mother and siblings. Without second thoughts, she brought the dog with her.

“Brian made me realize things such as why there are animal rescuers who continue with what they’re doing despite not being compensated by the government,” she said.

“I work hand in hand with chemists, suppliers, and manufacturers. All pet care products are at their best price and are 100-percent natural and organic,” Sheena shared.

One of the animal abuses cases posted on their page that got the attention of the Dabawenyos and the media is the death of the dog Gabriella after being stabbed by a drunk police official.

Gabriella was rushed to Shrine Pet Care Center but was pronounced dead on arrival. The video posted reached two million views and the Davao City Police Office made sure the suspect paid for the crime.

It was a milestone for the page, she said, as various support including financial aid started to pour in.

Since the page was launched, she said they had an estimated 40 cases handled, within and outside the city.

Their animal rescue and feeding mission had expanded, even outside the city.

After the magnitude 6 earthquake that struck Makilala, North Cotabato last year, Pet Avenue was one of the groups that responded to the needs of the animals in affected areas.

She admitted that the financial resources they were receiving are not enough to address and help all the animal abuses they are receiving in their page.

One thing that boosted her moral was her younger volunteers, as young as eight-years old. She then knew she had to restrategize everything.

“We realized, in the long run, we cannot always just do rescuing. We also need to promote responsible pet ownership,” Sheena realized.

Because of this realization, the page is now transitioning to promoting responsible pet ownership as well as involving the owners themselves to the advocacy.

“If you don’t have a pet, and you see a stray dog, at least don’t hurt them. If these animals are not harming you, then why would you harm them in the first place?”