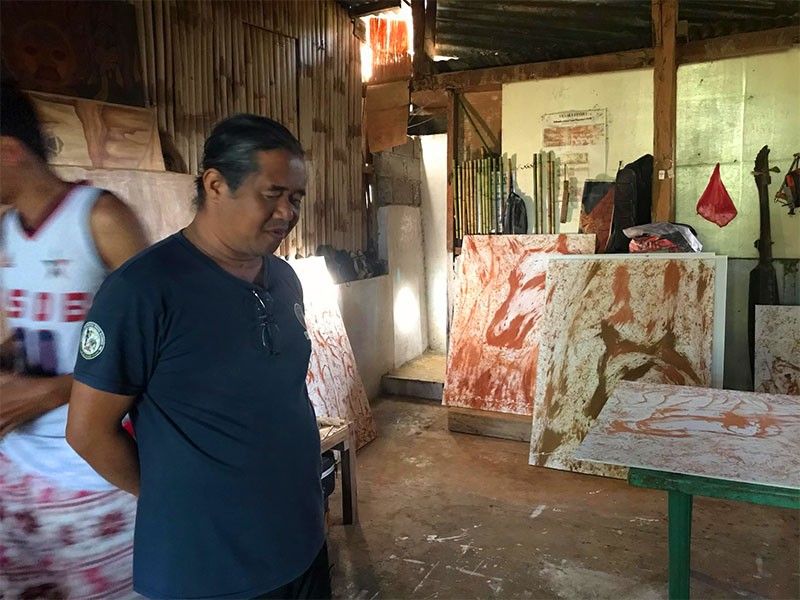 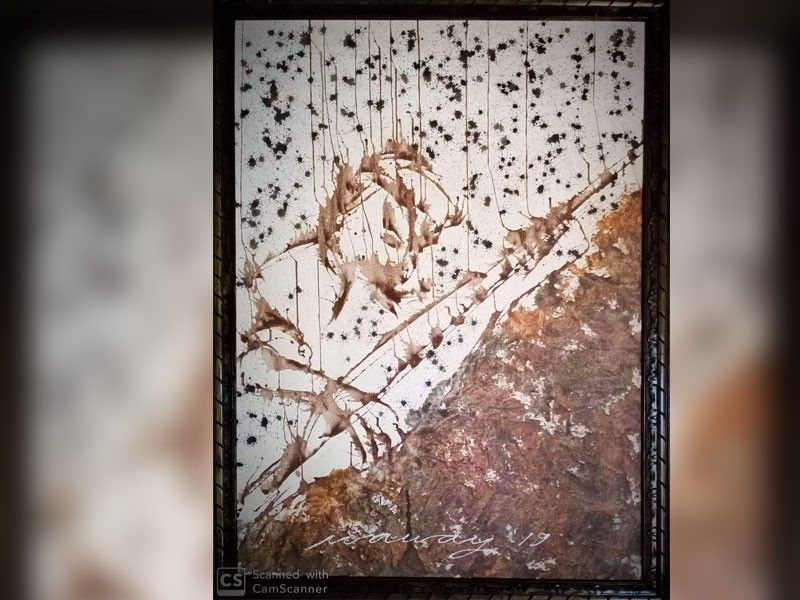 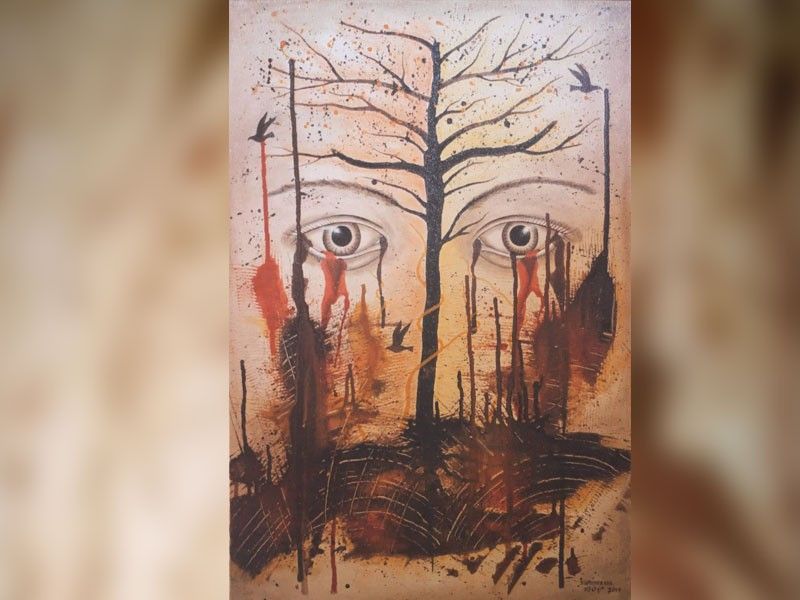 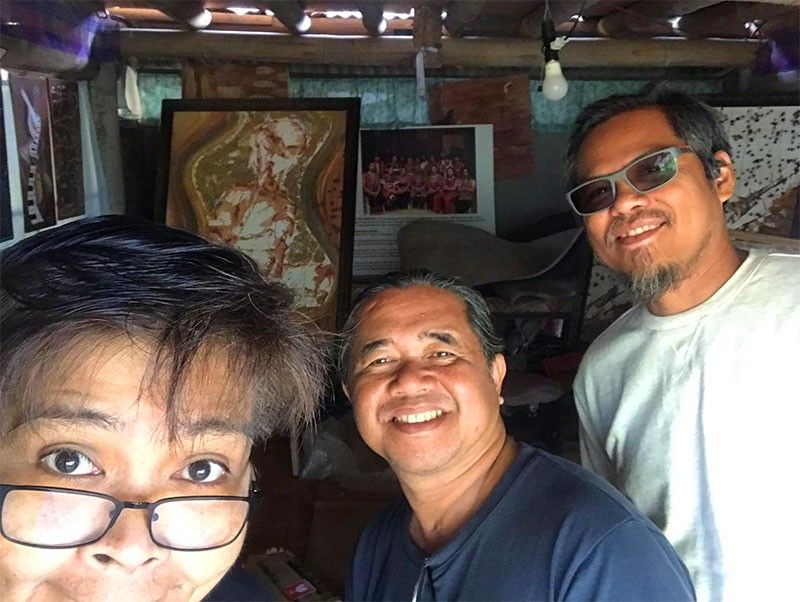 DAVAO. Waway with the writer and TheBauhaus owner Jon Traya. (Photo by Stella A. Estremera) 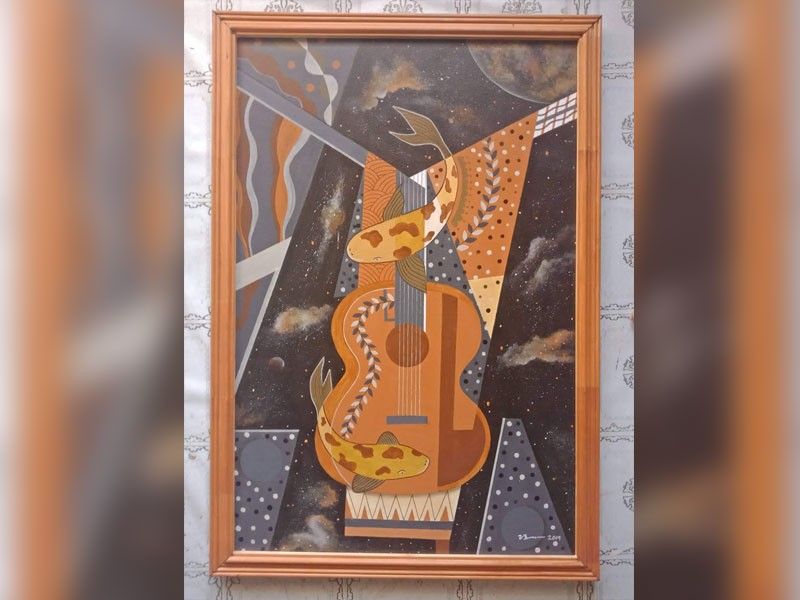 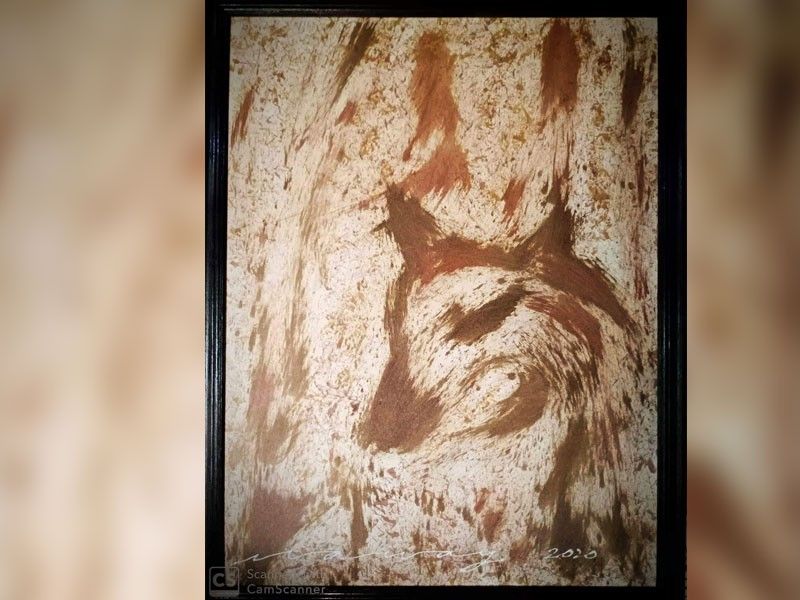 DAVAO. Dog by Waway Saway. (Photo by Stella A. Estremera)

IT HAS been a life-long romance with soil among these artists from the Talaandig tribe in Lantapan, Bukidnon, and on this love month, they are bringing their romance to Davao to debut an art movement to be centered at Davao City’s newest art gallery, TheBauhaus at Dona Vicenta Road in Bajada, Davao City from February 22-March 12, 2020.

Entitled “Romance with Soil”, the exhibit marks the second decade that these artists have been creating, serving as a fund-raiser for their participation at the Mindanao Art Fair, Exhibit and Conference in October 2020 (MindanaoArt2020).

The Talaandig’s romance with soil paints started with the tribe’s ambassador for culture and the arts, visual artist, singer, songwriter, and indigenous instrument player and maker Rodelio “Waway” Linsahay Saway.

Now in his 50s, Waway has passed on soil painting to three generations of Talaandig artists. Starting with his friends, among whom are Balugto Poonon Necosia and Raul Bendit, to his sister Salima, children, and now, his children’s children.

Waway is a legend in his own rights and has toured the world bringing music that he composes and performs using instruments patterned from the indigenous but made to create unique sounds like his two-stringed kuglong (two-stringed lute) played like a cello.

His art crosses boundaries skipping from visual to performance and impressing in whatever form, having even performed at the Lincoln Center in the US recently.

Earning as a musician in his 20s along with friends in Boracay and Bohol, Waway went home to Songco in the last quarter of 1996 and continued with his crafts, music, and visual arts to sustain his family.

What many do not know is that it was Waway who brought and popularized using epoxy to make pendants, bracelets, and even figurines. To augment their livelihood, he was making clay pendants and bracelets when he encountered a foreigner selling amethyst with sculpted hands made with a material he was not familiar with, but was so fascinated about because it was smooth and fine unlike his clay pendants.

They shared it with another musician who had some physical condition that limits his ability to earn. Someone else learned how by observing them as they taught this fellow musician, and did it on his own, undercutting Waway and Bebot’s pricing.

It was much like how he started in soil painting, a craft he picked up from Bohol but brought home and made into an art.

When he went home for good to Songco, he taught what he knew to his colleagues, his first student being Raul Bendit.

His set for the exhibit is an experiment on abstracts using outrageous materials like – walis tingting as brush, laying the canvas on the floor and playing around with the walis tingting to create. But that’s Waway and his penchant to explore, innovate, and make do with what is around him.

A band of artists

Formal opening is at 4 p.m. of February 22 after which the Talaandig artists will be performing in the same venue.

TheBauhaus is a creative space, lumad cuisine restaurant, and café with a performance area and gallery. It houses the furniture-making operations of Systems&Shelves, which specializes in school interiors, and SALT+Architects design company. It will also be the office of Lawig-Diwa Inc., the organizer of the Mindanao Art Fair, Exhibit, and Conference (MindanaoArt), the second staging of which will be in October 2020. The name TheBauhaus is a portmanteau of “Davao House” and is inspired by The Bauhaus.

“Romancing with Soil” is a fund-raiser for the Talaandig group’s participation in MindanaoArt2020. Lined up for the coming months are artists and art groups who are also participating in MindanaoArt.