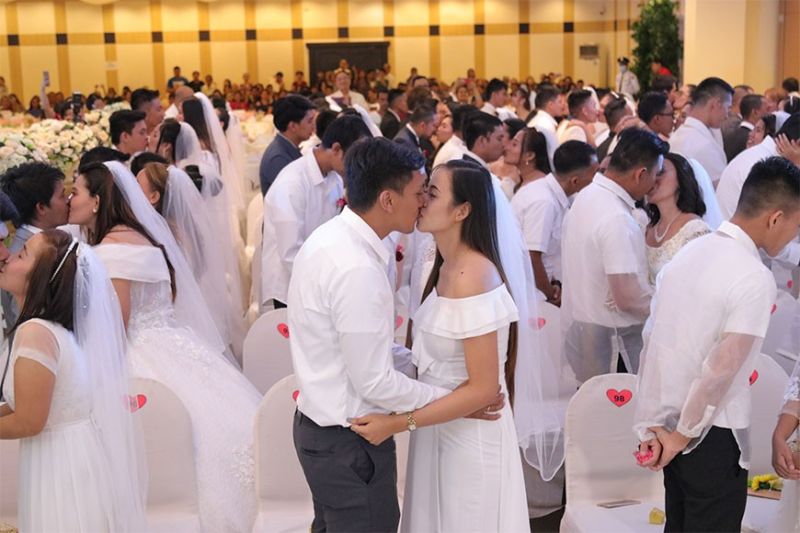 MASS WEDDING. Despite the threat of the Covid-2019, a total of 100 couples tied the knot on Valentine’s Day at the One Oases Convention Center during the “I Do, I Do: Araw ng Pag-IBIG”. The organizers implemented measures set by the Department of Health when holding events like this. (Mark Perandos) 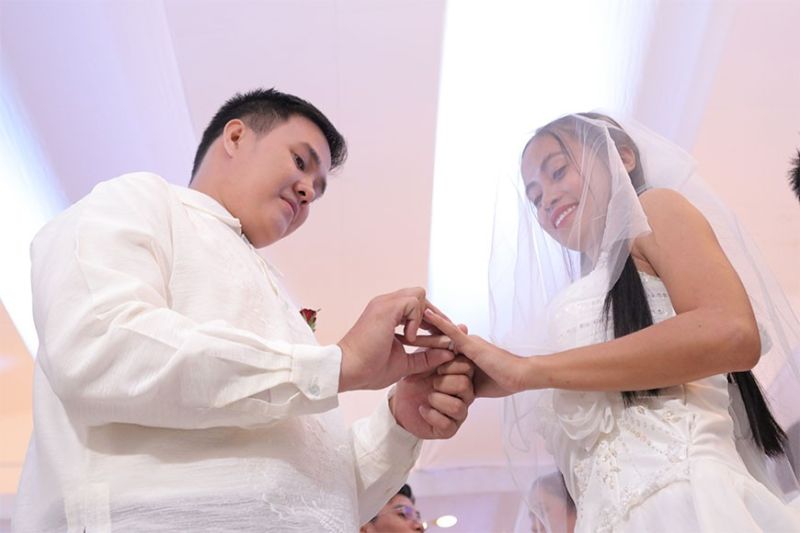 WEARING OF THE RING. A groom puts a wedding ring on the finger of his bride, symbolizing their union in matrimony. (Mark Perandos) 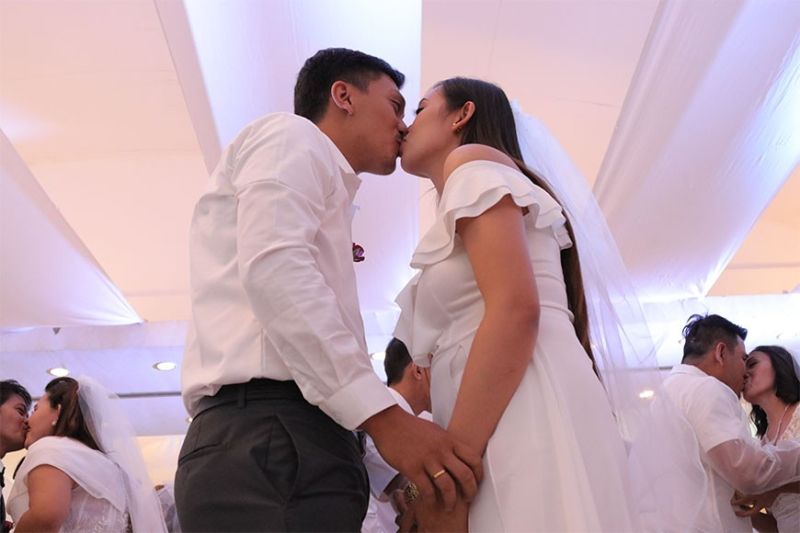 SEALED WITH A KISS. After the officiating official pronounced them as husband and wife, they officially had their first kiss as a legally-wed couple. Some 100 couples participated in the annual mass wedding event of Pag-IBIG fund. (Mark Perandos) 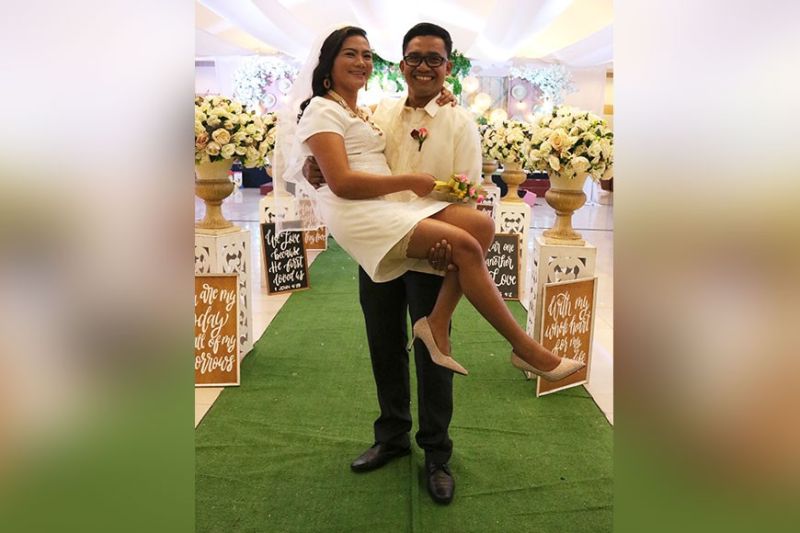 OFFICIALLY WED. Couples Daisy and Felix Ramirez strike a wacky pose after the wedding ceremony. The couple is scheduled to have a church wedding soon. (Ralph Llemit)

FEBRUARY 14 is a special day for couples. However, in the light of the coronavirus disease 2019 (Covid-19), health experts had discouraged them to date in crowded places.

But for the 100 couples who were about to say "I do" in a mass wedding annually organized by the state-run Pag-IBIG Fund at the Garden Oases Convention Center in Bo. Obrero, Davao City, there is no stopping them from reciting their wedding vows, "in sickness and in health."

For 14-year live-in couples Beverly (50) and Elmer (49), not even the virus can stop them from being Mr. and Mrs. Dela Cruz, making them the oldest couple in the wedding rites.

Davao City Mayor Sara Duterte-Carpio, earlier, canceled events in line with the celebration of the city's Araw ng Dabaw due to the Covid-19 global outbreak. Other events organized by the government and private firms also halted its activities.

It was the fear of the 100 couples that the event might not push through due to the threat of the virus. But as they say, "the show must go on."

Inspired from the agency's name, Pag-IBIG has been annually celebrating the tying of the not to its contributors entitled "I Do, I Do: Araw ng Pag-IBIG". Since 2012, more than 22,000 couples already availed the free mass wedding, sponsored by the government. In Davao City, a total of 1,439 couples were wed by the mutual fund agency.

This year, Pag-IBIG Southern Mindanao Area Heaf Manolito Olegario assured that they are in line with the guidelines set by the Department of Health (DOH) in organizing public events. DOH has been discouraging the public from going to crowded or mass areas.

Brides, before they could even walk down the aisle, are being checked for their body temperature using an infrared thermometer.

Olegario proudly declared that all the participants in the venue are "flu-free."

On the tables, aside from the flower arrangement, alcohols and hand sanitizers can be seen, a precautionary measure to stop the virus from spreading.

But despite the virus threat, that did not stop worried the couples, who for the first time, will be facing the altar and be pronounced as legal couple in the eyes of the state.

The importance of a wedded family

The wedding was Filipiniana themed, symbolizing the importance of uplifting the Filipino culture in building families.

"Pag-IBIG Fund stands witness in uplifting the Filipino culture in building families by providing free matrimonial civil ceremony with the objective of stressing the importance of intimate union and equal partnership of a man and a woman," Olegario said.

He said the Pag-IBIG did not anticipate the impact brought to the couples, since there are those who continue to remain in a "live-in" setting due to their incapability to wed at a church wedding.

Majority of the couple, according to Olegario, are financially challenged, making their relationship unstable.

Beverly admitted that it took them a long time before they were able to settle down legally.

"We felt like our relationship has not been blessed by the Lord," she said.

Beverly and Elmer were also convinced by their eldest son, who is 26-years old and got married before them, to participate in the "I Do, I Do: Araw ng Pag-IBIG."

Couples Jeffrey Labella, 29, and Hazel Villamero, 28, also shared the same reason. Being together for 11 years, and fostering three children, tying the knot was a long overdue due to financial constraints.

The money they had been saving for their planned wedding ended up for the medication of their two year-old child who was recently operated due to craniosynostosis, a condition in which the bones in an infant's skull grow together too early, causing problems with brain growth and head shape.

Both were college schoolmates when they first met each other. Beverly got pregnant at an early age while taking up an Education course. Jeffrey owe up the responsibility despite getting initial disapproval from both of their parents.

They are currently living an independent life. Hazel said being able to join a mass wedding was something that they had long wanted.

While most of the couples who joined were long-time patterns, Daisy and Felix Ramirez had a different story.

Both had been workmates as teachers at the Magallanes Elementary School for three years. But it was only last year that they became officially together.

Felix, prior to have fallen for Disay, was in an almost six-year relationship before it ended.

What started out as a wrong text message sent, Felix tried courting her and the rest was history. By Christmas, they were officially engaged.

Since both were already in their 30s, he said it was already the right time to settle down.

"We were only notified by Pag-IBIG three days before the wedding orientation. So I had to work on the necessary documents," he shared.

He said marriage was already part of the plan. Initially, they planned to tie the knot in a church wedding by August this year.

Joining a mass wedding as a "crazy idea", both of them agreed since both are busy with work.

"Actually, our officemates and students didn't know we were getting married today," Felix shared while sharing a laugh with his now-Mrs. Ramirez.

But still, he said the church wedding would still push through. This time, in front of their family and close friends. The couple also plans to have a baby but for them, it is not yet the right time.

The honorable judge also reminded them the importance of strengthening their family after marriage.

"Since the constitution states that the family is the basic unit of the society, there is a need to strengthen it," Carpio said during the wedding rites.

A weak family system would weaken the direction of the community, the official said.

While love should be the center in one’s marriage, Carpio said love alone won't make anyone successful.

Before the ceremony capped off, Olegario reminded them to "be responsible not only as husbands and wives to each, but also to their children."

The importance of marriage may have been devalued by some, but to the couples who submitted themselves to be legally united, their love for one another had been stronger than ever.

As their wedding vows says, "For better or for worse." But for them, a lucrative or a mass wedding, nothing else matters but their willingness to affirm their pledged to faithfully love one another, whatever it takes.