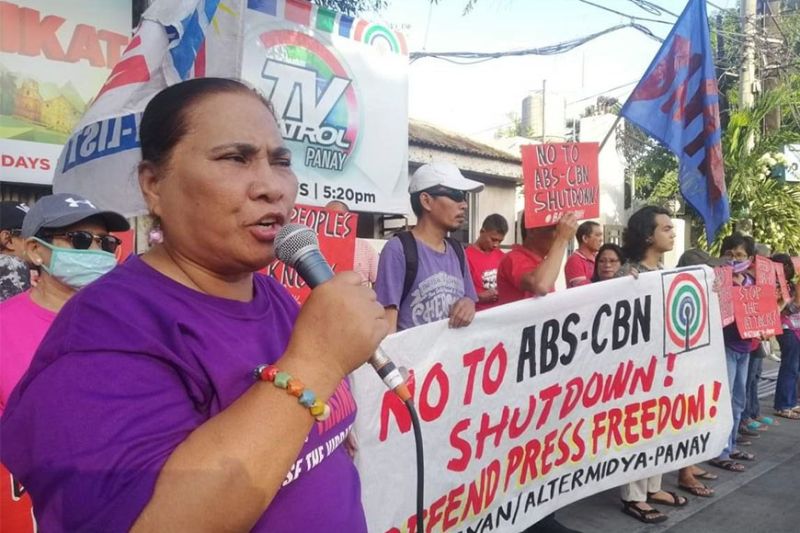 Iloilo progressive groups and members of the media showed their support to ABS-CBN on Valentine’s Day, February 14, by giving red roses. They held a protest outside the Iloilo ABS-CBN Compound in Lapaz, Militant groups, members of the alternative media, campus journalists and other media personalities gather to call for the renewal of franchise of ABS-CBN.

ILOILO progressive groups and members of the media showed their support to ABS-CBN on Valentine’s Day, February 14, by giving red roses to workers of ABS-CBN with messages of #NoToABSCBNShutdown, #DefendPressFreedom and #StopTheAttacks.

In a solidarity protest held outside the ABS-CBN Compound in Lapaz, militant groups, members of the alternative media, campus journalists and other media personalities gather to call for the renewal of ABS-CBN’s franchise.

“The move of the Duterte Government violates our constitutional rights to free speech and right to information,” said Elmer Forro of Bayan Panay.

“When a media institution is attacked, the people’s right to information is being restricted. This is what Duterte wants, that the people should only get their facts straight from his fake news factories such as the PCOO,” Forro added.

Forro added that the climate in the media right now is almost the same with that of Marcos’ dictatorship where ABS-CBN was also shutdown.

“It is not surprising for a president who has been very vocal in idolizing the late dictator Marcos to follow his footsteps in establishing a fascist rule. Duterte’s plan to silence its critics has already been proven to fail during Marcos’s reign,” Forro added.

Local alternative media chapter Altermidya Panay stressed that the continuing attack of Duterte against media organizations and journalists should stop.

“The attack in ABS-CBN is an attack on all media organizations. We need to unite as one to defend our rights and the people’s right to know,” said Altermidya Panay coordinator John Ian Alenciaga.

“About 11,000 workers will be affected by this move of Duterte. We have to make a stand and rally our ranks to defend the livelihood of these workers and our media workers,” said Alenciaga.

“Duterte’s intolerance of dissent should be faced with much wider and broader protests not only of the media but of the people whose rights, lives and livelihood are at stake given the climate of impunity, reign of terror and dictatorship under Duterte,” added Alenciaga.

“Let us remain vigilant and continue to defend our rights and press the government to stop its attacks against media organizations and journalists,” Alenciaga ended. (PR)