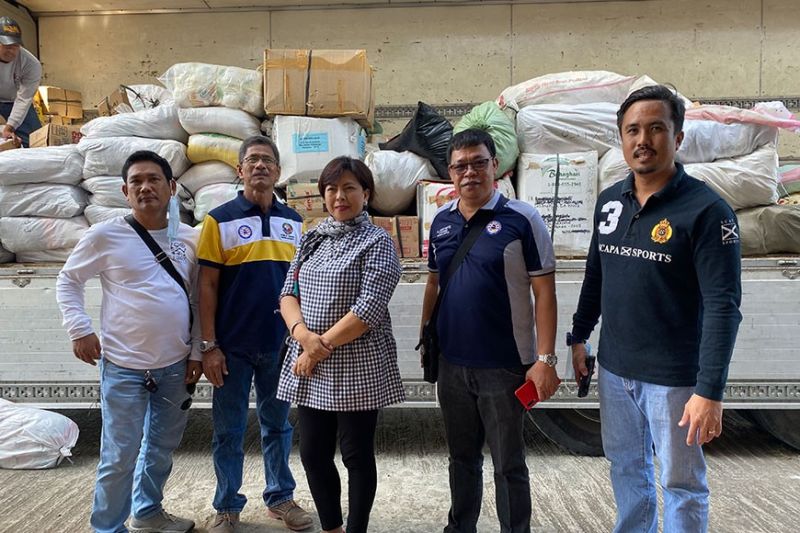 AID FOR TAAL VICTIMS. Ex-Officio Board Member Renato “Gabby” Mutuc, Ex-Officio Board Member Renato “Gabby” Mutuc, Liga ng mga Barangay President and concurrent village chief of Barangay Balucuc in Apalit town; together with Diosdado Vitug Jr, Association of Barangay Captains (ABC) president of Floridablanca; June Marimla, ABC president of Magalang; and Mario Cunanan, ABC representative from Macabebe turn over the food and other items collected by their league for the victims of the Taal Volcano eruption. With them is Provincial Social Welfare and Development Office (PSWDO) Head Elizabeth Baybayan. (Photo by Luisse Rutao)

CITY OF SAN FERNANDO -– Officials of the Liga ng Mga Barangay in Pampanga on Wednesday followed the footsteps of Governor Dennis Pineda in extending financial, food and non-food assistance to family victims of the recent eruptions of Taal Volcano.

Ex-Officio Board Member Renato “Gabby” Mutuc, league president and concurrent village chief of Barangay Balucuc in Apalit town said their league was inspired by the example of love, care and best practices initiated by the governor in helping the less fortunate volcano eruption victims in Batangas.

“We are here today because we were inspired by the governor. We saw his initiative to help. And that became our motivation and encouragement to do the same, “Mutuc said.

The Liga president disclosed that all members of the league voluntarily gave P 10,000 each to assist Batangueños displaced by the eruption of the Taal volcano.

Mutuc together with the other members of the league personally turned over all food and non-food items they have collected such as 5,000 pieces of 1-liter mineral water; 2, 000 pairs of slippers or flip-flops; 2, 000 sets of hygiene kits; and 25 cavans of rice aside from the assorted items donated by the Kapampangans.

Castro showed his deepest gratitude for the continued support extended by the Kapampangans to the Batangueños.

Castro also disclosed that the local government of Batangas is still asking assistance from all sectors to help in the recovery and rehabilitation efforts of the Provincial Government for the affected communities.

It can be recalled that Pampanga was the first province that immediately extended assistance to Batangueños, less than 24 hours after the Philippine Institute of Volcanology and Seismology issued Alert Level 4 warning of an imminent hazardous eruption in Batangas.