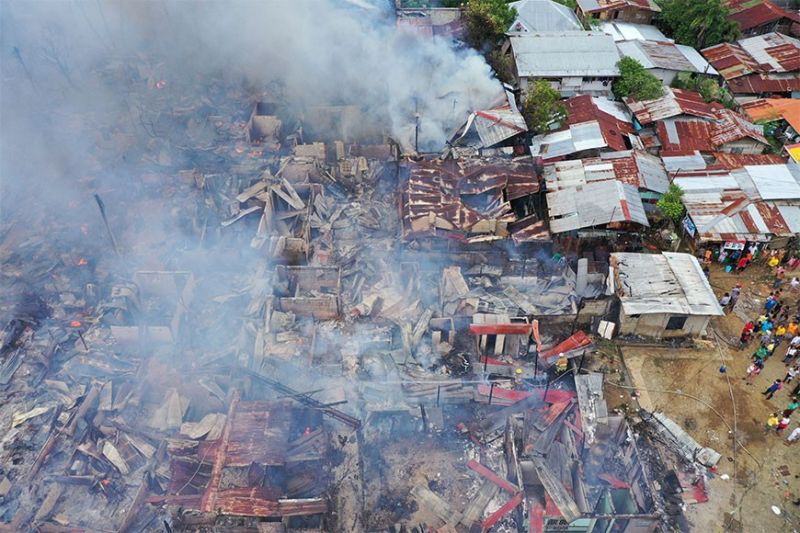 FIERY MONDAY. The fire that broke out inside the Almer’s Compound in Barangay Tabok, Mandaue City (in foto) was the second to strike the city on Monday, Feb. 17, 2020. The first one occured at dawn in Barangay Centro, which killed a retired judge and his wife. (Sunstar Photo / Allan Cuizon)

A FIRE that broke out on Zamora St. in Barangay Centro, Mandaue City early Monday morning, Feb. 17, 2020, claimed the lives of an elderly couple.

The couple went back to their burning house to rescue their grandson, 21-year-old Jeric Gestopa, who was on the third floor.

Fire personnel could not confirm the death of Jeric, who was reportedly autistic, since they have yet to recover his remains.

Cesar Gestopa, 58, Gerardo’s brother, said the fire started at the house of their relative Erlinda Ermac-Lumapas.

Cesar said Gerardo and Louella had got out safely and were out on the street with him while firefighters tried to douse the flames that had engulfed their house. When Gerardo couldn’t find his grandson, he realized the boy was still upstairs.

He rushed inside with his wife in tow, Cesar said.

The family said Jeric’s nanny tried to drag him out, but he escaped her grasp and remained inside, while she jumped off the window to the roof of the neighboring house and wounded her leg.

The fire damaged six houses inside the Ermac-Gestopa Compound. Damage to property was estimated at P185,500.

The bodies of Gerardo and Louella were recovered at the side of their house, 10 meters apart, Lauzon said.

Lauzon said they have requested a K9 unit from the Bureau of Fire Protection to help locate Jeric’s body.

He said his men went to the third floor but didn’t find any trace of him.

At 1 p.m., fire broke out inside the Almer’s Compound in Barangay Tabok, Mandaue City.

The blaze destroyed around 150 houses and destroyed P450,000 worth of properties.

Lauzon said they have yet to determine where the fire started.

Both fires are still being looked into. (KFD)