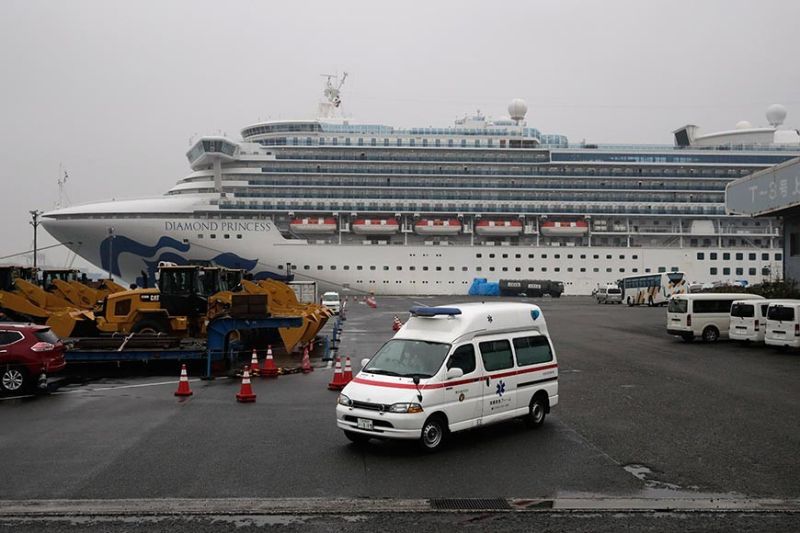 JAPAN. An ambulance leaves a port where the quarantined Diamond Princess cruise ship is docked Sunday, Feb. 16, 2020, in Yokohama, near Tokyo. The U.S. says Americans aboard the quarantined ship will be flown back home on a chartered flight Sunday, but that they will face another two-week quarantine. (AP Photo)

SIXTEEN more Filipinos were found positive for the novel coronavirus in Japan over the weekend, bringing the total number of infected Filipinos on board the MV Diamond Princess cruise ship to 27 as of Monday, February 17.

Department of Foreign Affairs (DFA) Assistant Secretary Eduardo Meñez said in a press briefing in Malacañang Monday that all 27 are crew members of the cruise ship which is currently under quarantine in Yokohama, Japan.

“Everyone has been brought to the hospital for better care,” Meñez said.

He said the Philippine Embassy in Tokyo is coordinating with the relevant Philippine and Japanese government agencies as well as with the World Health Organization, the Princess Cruises and the manning agency to make sure that the needs of the Filipinos are met and to facilitate their eventual return to the Philippines.

Meñez said the situation of the Filipinos on board the ship will be discussed in a meeting Monday afternoon by the technical working group of the Inter-Agency Task Force for the Management of Emerging Infectious Disease (IATF).

The TWG will present its recommendations to the task force during its meeting Tuesday, February 18.

“Of course, nothing will move without the clearances of the Japanese government and I understand that some countries have already repatriated (their citizens),” Meñez said.

“But, as you know, most of the people that we have are crew members (of the ship) so we will await the recommendations of the technical working group with regard to the labor and immigration requirements before they can be sent home,” he added.

As of Sunday, February 16, 2020, the Japanese government said a total of 355 people on board the ship were found positive for the virus.

Meñez said the Filipinos on board the ship could not be repatriated before February 19. Whether those in the hospital would be cleared to go home is still not known, he added.

Aside from the 27 Filipinos in Japan, one Filipino in the United Arab Emirates (UAE) has developed symptoms of Covid-19, the respiratory disease caused by the novel coronavirus.

No Filipinos in China have been found positive for the virus.

The death toll as of Sunday was 1,666 in China and 3 outside China. (MVI/SunStar Philippines)