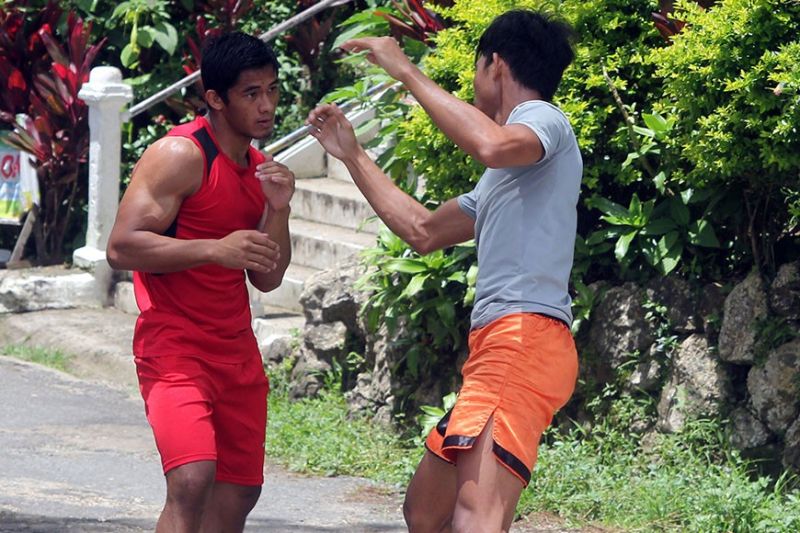 BAGUIO. Hoping to defend his world bantamweight title in Brave Combat Federation soon here in the Philippines, Stephen Loman stays active with his Team Lakay fighters joining them in a morning skirmish at the Lourdes Grotto in Baguio City. (Roderick Osis)

STEPHEN Loman is hoping to be busy fighter this year.

After successfully defending his world bantamweight title in 2019 in Brave Combat Federation (Brave CF), the Team Lakay champion is eager to defend his title at least once in the Philippines.

Loman fought twice last year, defeating Elias Boudegzdame with a fourth round knock-out in his first title defense in the country, then followed it up with an impressive victory against Ilias Sanoudakis.

"Hopefully, I want to defend my title here in our soil so that our fans can have a chance to watch the show and it will be exciting if Brave will return to the Philippines," the soft-spoken MMA champion told SunStar Baguio.

And after cleaning up the bantamweight division, Loman said he will be ready to face any challenger.

Although he has no plans yet of going up to featherweight, Loman has been called out several times by the featherweight champion, Bubba Jenkins, who wants a unification title match for both belts.

Loman, however, said it will still depend on Brave if they will stage the fight.

Undefeated in his last eight bouts, with a record of 13 wins and two losses, Loman was recently named Brave's fighter of the year for two straight year.

Loman is the only bantamweight world champion who has defended his title four times in a row.

Loman said the training aims to level up their over-all game, including their striking skills and some techniques on the ground.

"We are doing our best to address our wrestling and jujitsu. I think we are improving our ground game," added Loman.