Relocation of residents eyed for Butuanon 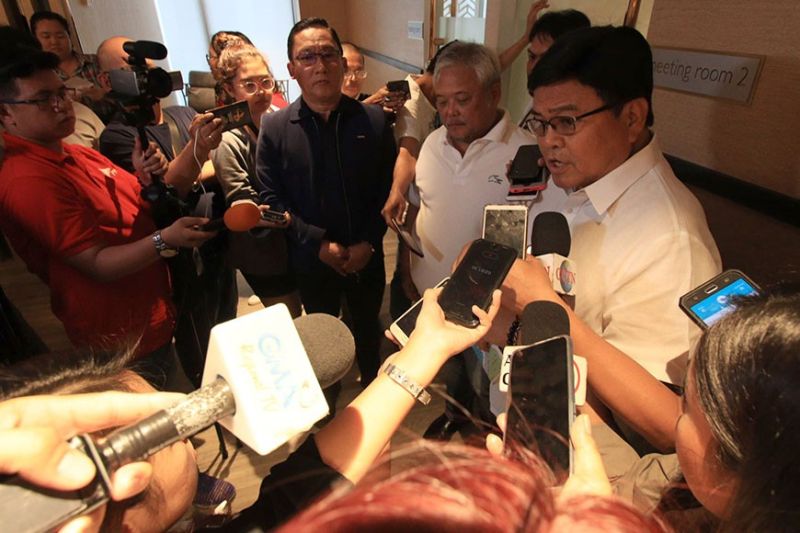 RIVER MEET. Mayors Jonas Cortes of Mandaue City and Edgardo Labella of Cebu City meet with Department of Health 7 Director Jaime Bernadas and other officials on the reappearance of the poliovirus in Cebu based on samples taken from the Butuanon River. (Contributed Photo)

COMPANIES that release their wastewater to the Butuanon River and nearby homes not fitted with toilets are among the reasons the waterway is polluted and toxic and has the poliovirus.

These findings came up in a coordination meeting Monday, Feb. 18, 2020, of Mayors Jonas Cortes of Mandaue City and Edgardo Labella of Cebu City with regional and local officials, including Department of Health (DOH) 7 Director Jaime Bernadas.

They discussed ways to prevent polio infection after the Research Institute for Tropical Medicine of the Department of Health (DOH) announced Saturday, Feb. 15, that water samples from the Butuanon River in Mandaue City tested positive for poliovirus. While the samples showed the presence of the virus, the DOH stated there is no polio infection case in Cebu or in the region.

Poliomyelitis, or polio, according to the World Health Organization, is a highly infectious viral disease that mainly affects children. The virus is transmitted person-to-person and is spread mainly through the fecal-oral route. It can also spread through contaminated water or food.

Among the measures decided during the meeting were the relocaton of settlers along the Butuanon River but no timeframe was given and the order to place as off-limits the Butuanon River, Tipolo River, Mahiga Creek and Cansaga Bay.

Mandaue City has 881 informal settlers near Butuanon River who will be subject to relocation.

In Cebu City, the health office is conducting a survey of residents within the five-kilometer radius of the Butuanon River. The survey will determine those who have not completed their polio vaccination and those with health problems and are susceptible to infection.

The profiling of residents started last Feb. 13, City Health Office head Daisy Villa said. The vaccination of children below five years old will be intensified as Villa assured the City has enough stock of the vaccine.

As to relocating settlers, Labella said relocation is a long-term measure and will be implemented once new medium-rise buildings of the City Government will be completed.

The 20-kilometer Butuanon River passes through Barangays Pit-os, Talamban, Bacayan, and San Jose in Cebu City and connects to the Mandaue City.

Mayor Cortes said they will collaborate with Consolacion town and Lapu-Lapu City as these are included in the five-kilometer radius for monitoring of the poliovirus.

As to the river cleanup, Cortes said the Department of Public Works and Highways and the Mandaue City Environment and Natural Resources Office (Cenro) would work on it “but they should have protective gear.”

Araceli Barlam, head of Mandaue Cenro, said there are over a hundred industrial companies that dispose of their wastewater to Butuanon River. There are also “a lot of households” that have no toilet facilities and throw their waste to the same waterway.

Barlam said she was not surprised that the Butuanon River has the poliovirus as water there is already toxic based on research. The situation now presents the opportunity for the public to pay attention to the river and have a collaborative effort to save it, she added.

DOH 7’s Bernadas said his office will try to determine the location and carrier of the virus that caused the contamination of the river. (JJL, JCT, RSR)