AP fact-check: Trump didn't save the Philippines from IS 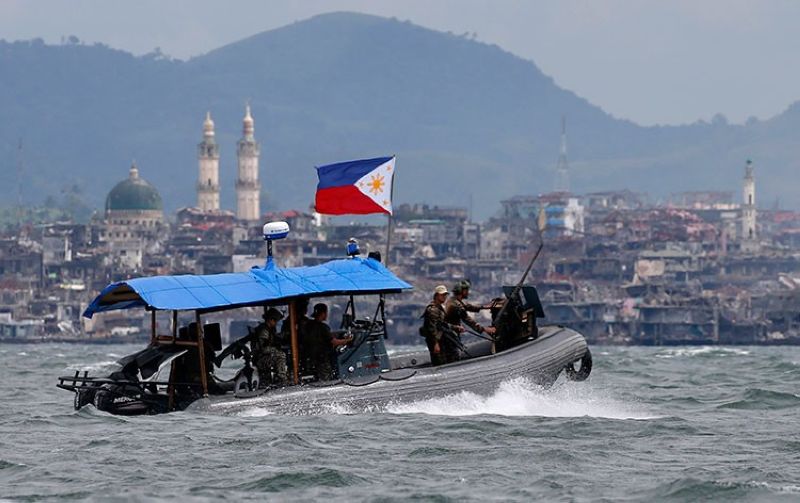 MARAWI. In this October 19, 2017, file photo, Philippine Navy commandos aboard a gunboat patrol the periphery of Lake Lanao as smoke rises from the "Main Battle Area" where pro-Islamic group terrorists made a final stand amid a massive military offensive of Marawi City in Mindanao. (AP)

MANILA -- United States President Donald Trump contended this week that the US saved the entire Philippines from Islamic State (IS) terrorism. His assertion vastly overstated both the threat IS posed to the country and what the US did about it.

His statement, the facts and the backstory:

TRUMP: “We helped them defeat ISIS. ... But if you look back, if you go back three years ago, when ISIS was overrunning the Philippines, we came in and, literally, single-handedly were able to save them from vicious attacks on their islands.” -- reacting Wednesday to Manila’s notification that it will end a security pact allowing US forces to train in the country.

THE FACTS: The Philippines were far from overrun by the group.

In May 2017, in the operation touched on by Trump, more than 600 IS-aligned local terrorists, backed by foreign jihadists who only numbered in the dozens, laid siege to Marawi, a small Islamic city in the largely Roman Catholic country. They held control of several neighborhoods and multiple buildings. Philippine troops launched a massive offensive and routed them after five months. US and Australian aircraft helped with surveillance.

It was by no means a single-handed US military achievement.

Overall, the number of IS-linked terrorists in this country of more than 100 million people has been extremely small, just a few hundreds. They are from a selection of tiny armed groups largely confined to the jungles of two southern islands and patches of marshlands in the central part of southern Maguindanao region.

Several dozen American military personnel have been stationed in the south for counterterrorism and counterinsurgency training and to provide intelligence to local troops. There has been no evidence that even a few Americans took part in actual combat in the past decades.

Since the 2013-2014 rise of the Islamic State in the Mideast, very few from the organization have come to the southern Philippine areas where Filipino extremists have a presence.

IS offered bomb-making training, Islamic lectures and money and helped plot attacks, while giving a few dozen of its young fighters exposure to combat in this part of the world.

On Trump’s point that IS fighters are defeated in the Philippines, there haven’t been enough of them for Philippine leaders to make such a declaration. But they have repeatedly said that Filipino terrorists linked to the group have been significantly weakened by Philippine offensives.

Having US troops in combat would breach the Philippine constitution and be opposed by the Philippine government, its military and defense leaders, nationalists and left-wing groups.

President Rodrigo Duterte made known his displeasure with the US before and after he rose to the presidency in 2016. President Barack Obama had expressed alarm over Duterte’s deadly anti-drug crackdown, angering the brash Philippine leader.

On Tuesday, Duterte gave notice to the US government of his administration’s intent to terminate the Visiting Forces Agreement, which allows the entry of large numbers of US forces for joint training with Filipino troops.