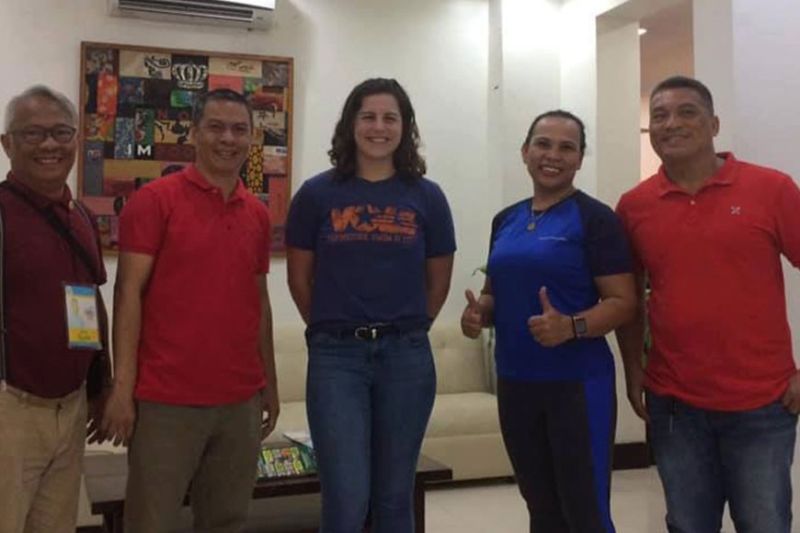 WHAT Brianna Leverenz had in mind after her swimming days in elite college competition in the US was to give back the blessings she enjoyed from the sport.

Her goal has opened doors for young people in the Philippines to learn how to swim.

And the threat of the coronavirus disease (Covid-19) has not stopped Leverenz, 22, from fulfilling her mission -- to pursue a 12-city visit in her three-month stay in the country.

"Honestly, I was more afraid of the Taal Volcano eruption than the virus. It freaked me out when I was driving then from Batangas to Sta. Rosa during its restiveness," the American swimmer recalled.

Since arriving last January, Leverenz has initiated talks and trainings in Luzon for three weeks, and another three weeks in Visayas before her Mindanao sojourn.

"I chose Philippines because it's an archipelago. Meaning, it has plenty of waters around," she said.

She added that through the internet, she learned that a lot of Filipinos do not know how to swim despite the abundance of natural waters.

One local trainer, Wea April Gerona, said she enjoyed valuable tips from Leverenz, something that she never had when she was still the Northern Mindanao's top bet in Palarong Pambansa during her high school days with Montessori de Oro.

"I would never know the right diet and nutrition then as swimmer before any competition. Leverenz's teaching is an eye-opener and a revelation I could share now that I'm a coach and a trainer myself," said Gerona, who is working as part-time teacher at the Misamis Oriental General Comprehensive High School (MOGCHS).

Gerona said coach Leverenz is quite amazing that she could balance her academics and training with the varsity team.

She took a three-month vacation leave for this worthy cause that she had been longing after retiring from competitive swimming.

The American coach confided she had to overcome a spinal injury in 2015 to keep herself up in the college swimming team.

Indeed, a total package of herself. And that what made her even more inspiring to the forum's participants.

"This is what we are interested of her. She is a total package of beauty, brains and character," said Esparago, herself a many-time champion as a staunch disciple of the Japan Karatedo Association (JKA).

Other than that, Brianna is sister of 2012 Olympic bronze medalist Caitlin Leverenz.

"I know competing in the elite level is difficult, but just do your best," Leverenz told the young and budding swimmers in Cagayan de Oro.

For coaches and trainers, Leverenz said they should encourage the kids to become better athletes and optimize what they can do.

She added, though, that not all of them would become champion. "We'd like to see them in competitive level but we can't force them," she said.

From Iligan, Leverenz will be back in Cagayan de Oro Wednesday, February 19, to give a proper forum to college athletes and trainers.