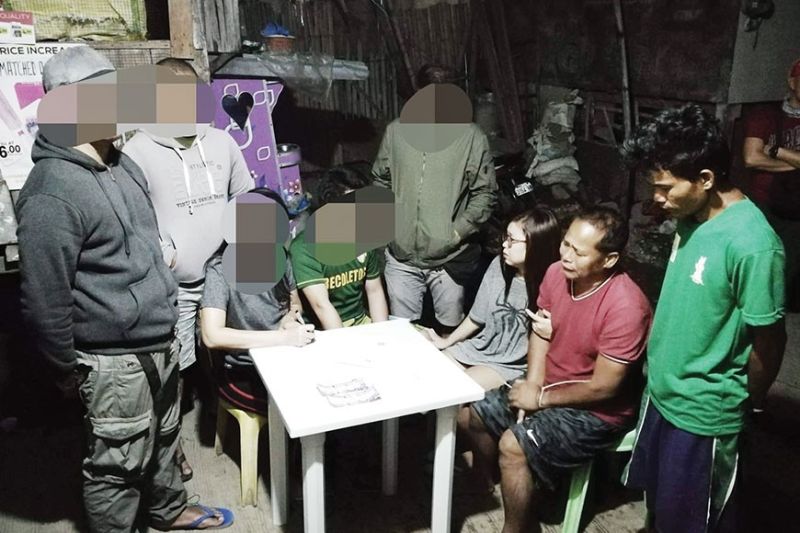 TALISAY’S ANTI-DRUG CAMPAIGN. Francisco Luage (in red shirt) and his daughter, Sangguniang Kabataan chairman Guendolyn Luage (seated beside him) of Barangay Lawaan, Talisay City are arrested during an anti-drug operation conducted by the Talisay City Police on Wednesday, Feb. 19, 2020. About P600 worth of shabu was allegedly found in their house during the raid. Francisco, a former chief of barangay tanods, denies he or Guendolyn are into the drug trade. (TALISAY CITY POLICE)

THE chairperson of the Sangguniang Kabataan (SK) in Barangay Lawaan III in Talisay City was arrested together with her father, a former chief tanod, in an anti-illegal drug operation Wednesday, Feb. 19, 2020.

In other anti-drug operations, a suspected drug pusher was killed while resisting policemen, while 12 others were arrested also in Lawaan III.

Pelare said a buy-bust was also conducted on the elder Francisco, who was a former chief tanod (watchman) of Barangay Lawaan III, aside from the search conducted on his house at 1:15 a.m. Wednesday.

He said P600 worth of shabu was confiscated from the Luages’ residence, where Guendolyn, chairman of the SK in the barangay, was at the time of the search.

However, Francisco, in a SunStar interview, denied that he or his daughter was involved in the illegal drug trade.

He said police knocked on the door of their residence on Wednesday.

He said he was frisked but nothing was recovered from him, which raises the question of where police obtained a small pack of shabu presented as belonging to them.

Girlie Luage, a drug lord operating in Talisay City before he was killed in April 2019, was the son of Francisco and brother of Guendolyn.

Girlie was said to have taken over the operations of drug lord Steve Go, after Go was killed by a fellow inmate inside the Mandaue City Jail in June 2018.

According to Pelare, Francisco was also arrested in July 2019 but availed himself of the plea bargaining agreement.

Pelare said that based on their intelligence monitoring, the Luages never stopped their illegal drug operations even after the death of Girlie and the arrest of Francisco.

Police also found out that even when Girlie was still alive, Guendolyn was already the collector of the sales in their illegal drug business.

“They have never stopped. Their sales activities slowed down after Girlie’s death, but they took over the drug operations of Steve Go and Girlie. They could dispose of P200,000 worth of drugs per week,” Pelare said in Cebuano.

According to Francisco, his daughter, Guendolyn, was never involved in illegal drugs. He said they were dependent on Guendolyn being employed in a big private company.

“Not a single one of my family members is involved in drugs. My daughter is very well-behaved, working and serving properly,” Francisco said in Cebuano.

Right before the Luages’ arrest, police also served a search warrant on Gilbert Campo, one of the pushers in Luage’s network, at 12:58 a.m.

Campo fought it out with the police during the operation, resulting in his killing.

The subject of another search warrant was Anna Fe Abrenica, wife of Girlie, who eluded arrest.

The alleged downlines of the Luages who were also arrested were Kirby Tavera Basillote, Saturnino Basillote, Newton Jan Toritoy, Remedios Regodos Rico and eight others who are newly identified drug players.

Recovered from the simultaneous operations were drugs with a total value of P266,150.

Pelare said they will further investigate the network of the Luages in Barangay Lawaan III.

Meanwhile, Cebu Police Provincial Office Director Colonel Roderick Mariano said they were thankful to the residents in the barangay who reported the illegal operations of the Luages.

Mariano expressed sadness that public officials are supposed to guide the youth but are the ones involved in illegality.

The arrest of Guendolyn Luage “will serve as a warning” to public officials not to engage in illegal activities, Mariano said.

said he was “shocked and saddened” that an SK official was one of those arrested during the police operations on Wednesday.

“But again, no one is above the law,” Gullas said.

Gullas said the operation that led to Luage’s arrest was a “clear message” that the city’s war on illegal drugs was not yet over and would continue relentlessly.

President Rodrigo Duterte in his visit to Cebu on Jan. 19, 2020 had called out Talisay City for its persistent drug trade. (FMD, AYB / MVG)