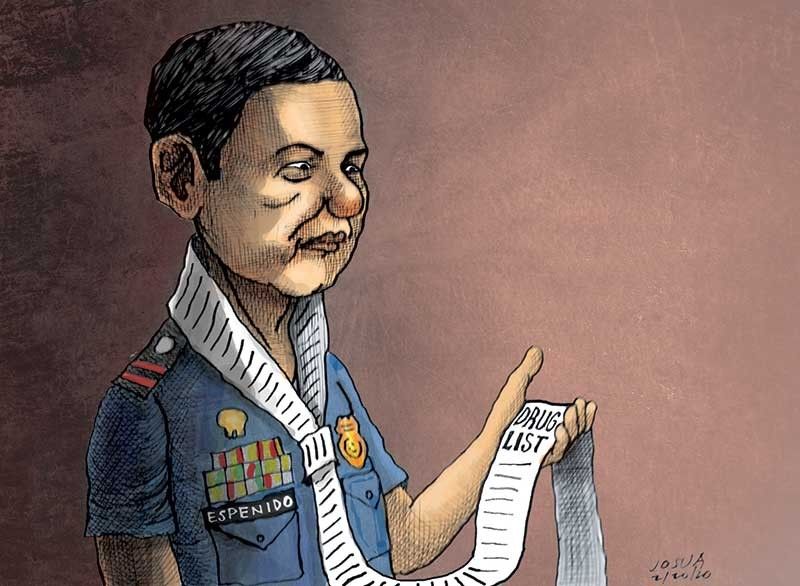 BEHOLD the weight in Lt. Col. Jovie Espenido’s words in an interview over radio dyHP on Tuesday morning, Feb. 18, 2020:

“Walay lain nga mopatay nako. Ang gobyerno lang, pulis lang (There would be no other entity that would kill me. It would be government, the police),” he said, and added, “Ang PNP buotan, pero ang tawo sa PNP maoy problema (The PNP is good as an institution, but the problem is its personnel).”

The controversial police officer sent out the message at a time when Philippine National Police Chief Archie Gamboa had ordered a general gag to the 357 police officers under investigation for being in the PNP’s narco-list, in which Espenido was classified under high-value targets (HVT). Gamboa ordered the officers not to issue any opinion publicly while the adjudication is in progress.

It turns out Espenido has been out in a spree of media guesting. Last week, he held a press conference in Bacolod City. On Tuesday, Feb. 18, 2020, he guested in a radio interview where he said some people in the PNP are out to discredit him. While at this, he’d been sending text messages to Manila media, airing his thoughts on his inclusion in the narco-list.

He had, on various occasions, also expressed his dismay over Gamboa. The PNP chief had all the powers to verify the information; he could have easily removed Espenido from the list. A “failure of intelligence” it was, said Espenido.

His inclusion in the narco-list, he said, stemmed from an alleged photograph of him in the company of then Albuera, Leyte mayor Rolando Espinosa and the latter’s lawyer Rogelio Bato Jr. in 2016. Espinosa was reportedly Eastern Visayas’s biggest drug lord. Espenido was then Albuera’s police chief when the raid that eventually killed Espinosa while in detention happened.

Espenido said he was already cleared of the allegations in 2017 yet.

Espenido also led in the operation that neutralized the then powerful Parojinog clan in Ozamis, Misamis Occidental.

Gamboa said Espenido will be dealt with internally, while Presidential Spokesman Salvador Panelo announced that Espenido still enjoys the trust of the President.

If anything, all the mix-up in this narco-list tells of the layers of intelligence work within the PNP. It is symptomatic of an unrest while it undergoes internal cleansing.

Espenido’s public statements could be his way of making noise to parry threats to his life and career. This scuffle is a thing to watch. It could be key to understanding how the PNP is waging the drug war internally.