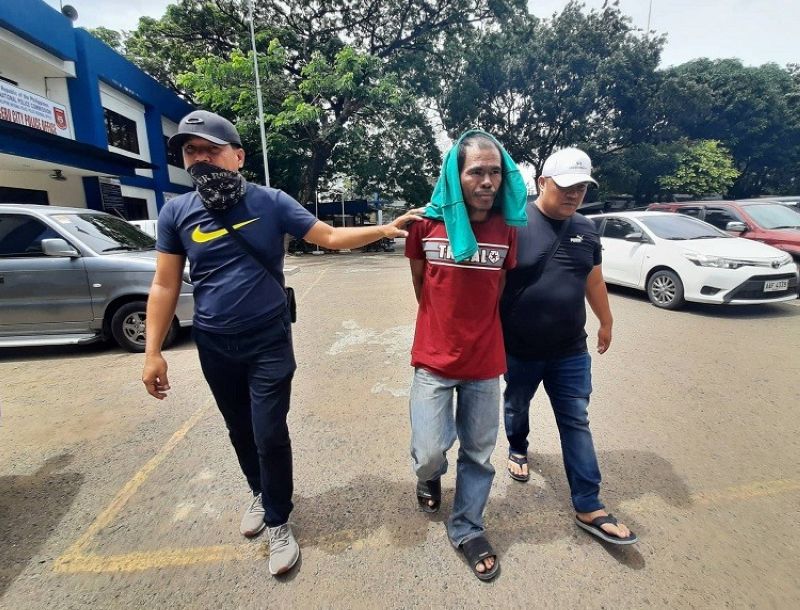 CEBU. Wilfredo "Willy" Sabella, a resident of Buhisan, Cebu City, was served with a warrant of arrest for killing his neighbor who stole his fighting rooster in 2001. (Photo by Arnold Bustamante)

A MAN tagged by the local police as the most wanted person in Cebu City was arrested recently, but he questioned his being ranked as the number one criminal.

His arrest was based on a warrant issued by Regional Trial Court Judge Galicano Arriesgado in relation to the killing of his neighbor who had stolen his fighting cocks in Buhisan in 2001.

But police said Sabella was a hitman or a gun-for-hire linked to the ambush of San Fernando Mayor Lakambini Reluya. That incident resulted in the killing of her husband, Ricardo “Nonoy” Reluya Jr.

For his part, Sabella said he was surprised why he was tagged as the most wanted person in Cebu when he confessed to killing only one person.

“Usa ra gani akung napatay, number 1 na hinuon? Unsaon nga kawatan man gyud? Nahinaykan nuon nako (referring to the killing that was the basis of the arrest warrant),” Sabella said. (I killed one person and I am number one already? What can I do? He was a thief. I couldn’t help it.)

But Soriano said Sabella is part of the network of Jerome Labitad, a gun-for-hire group operating in Talisay City and Cebu province.

Labitad’s group has expanded with its connections to the illegal drug syndicate headed by Franz Sabalones.

Soriano said that, from the information they gathered that they are now trying to validate, Sabella is allegedly involved in the ambush of San Fernando Mayor Reluya last year.

“Tinitingnan namin yan, yung coordination namin sa CPPO (Cebu Police Provincial Office ) baka ma settle namin yan,” Soriano said. (We are looking into that and we are coordinating with the CPPO and we might settle that case.)

Sabella admitted his affiliation with Labitad’s group but, he said, it lasted only a month because he couldn’t agree with Labitad.

He also denied being the hitman of Sabalones, saying he did not even know Sabalones. (MVG)