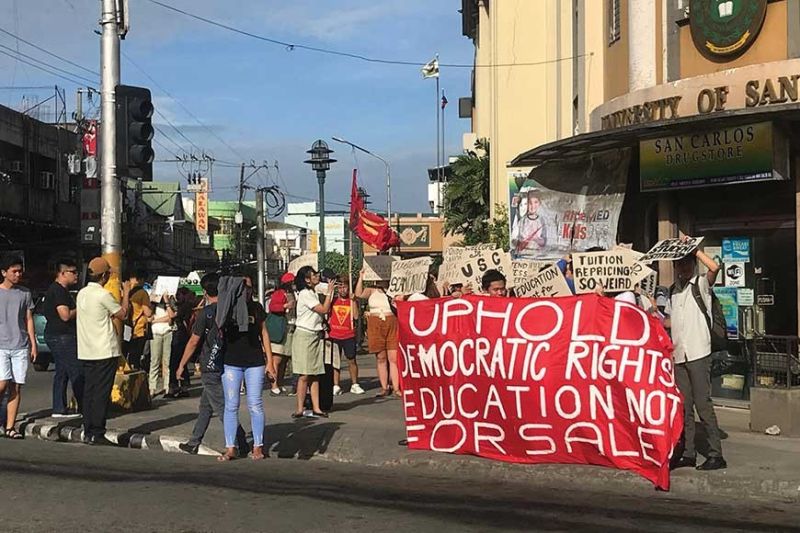 PROTEST. University of San Carlos students slam the impending tuition hike for the Law and Graduate Schools by staging a rally outside their downtown Cebu campus on Feb. 21, 2020. (SunStar Cebu / Rebecah Roberts)

STUDENTS from the University of San Carlos (USC) staged a rally outside their downtown Cebu City campus, raising banners that read “Uphold Democratic Rights, Education is Not for Sale” on Friday, Feb. 21, 2020.

A USC representative, though, said the proposed increase does not affect undergraduates and is necessary as it is meant to cover the pay increase for the university’s professors.

Around 30 students gathered to express their disappointment on the pending eight percent tuition hike for the coming school year.

The increase is set to be implemented for the Law and Graduate School Departments because they were not included in the school’s repricing in 2018.

The school implemented a repricing in 2018 with the intention of raising the salary of its university professors.

Lim, though, alleged that students were not consulted about the matter.

She said they only found out about the development when they received copies of their study load.

In a separate interview, USC spokesman Cerwin Eviota clarified that the tuition hike will not affect undergraduate students.

Eviota said they held a consultation on Friday, Feb. 21, as a prerequisite.

The tuition increase is said to be minimal with P150 per unit in graduate school; P145 for first year law students, and P140 for law students in higher years.

“USC offers among the lowest law school tuition rates in the region, even much lower compared to law schools in Metro Manila. USC increased by eight percent the salaries of college faculty members, across the board, including undergraduate professors,” Eviota said.

“Despite that, no increase in tuition has been sought for the undergraduates. USC used its savings in recent years during the senior high school transition,” he added.

The consultation between the Supreme Student Council and the administration on the proposed move will end next Friday, Feb. 28. (RSR, USJ-R Intern Mae Fhel Gom-os)