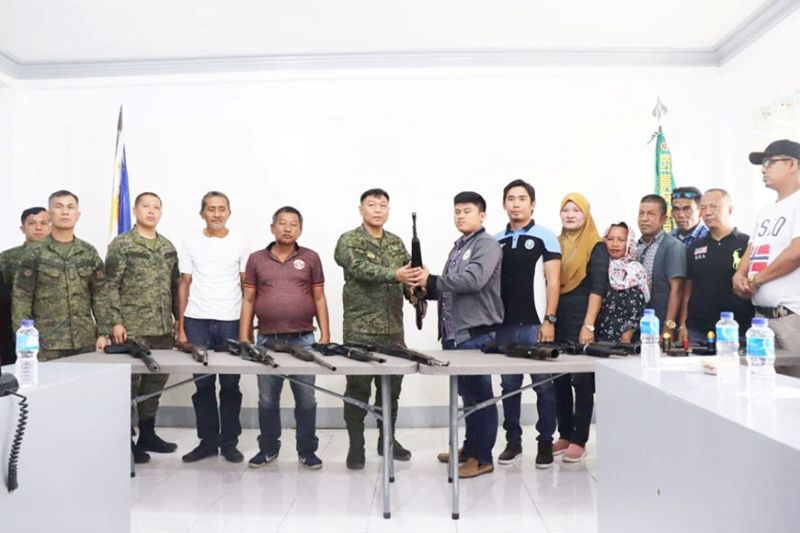 ZAMBOANGA. Colonel Joel Mamon, deputy commander of the Army’s 601st Infantry Brigade (in military uniform), receives a rifle in a ceremony that saw the surrender of 11 loose firearms on Friday, February 21, by the village officials of Talitay, Maguindanao. (Contributed photo)

VILLAGE officials of Talitay, Maguindanao have surrendered 11 loose firearms to the military in the province.

Colonel Joel Mamon, 601st Infantry Brigade deputy commander, presided the ceremonial turnover of the firearms Friday and extended his gratitude to the local officials of Talitay for their support to the brigade's campaign against loose firearms.

“It is each and everyone's responsibility to maintain peace and order by addressing the root causes of the issues in the community,” Mamon said.

These were placed in the custody of 90th Infantry Battalion.

“We fully support the campaign of the 601st Infantry Brigade and the national government against loose firearms,” said Talitay acting Mayor Moner Sabal in response to Mamon.

Colonel Jose Narciso, 601st Infantry Brigade commander, lauded the collaborative efforts of the 90th Infantry Battalion and the local officials that led to the success of the campaign against loose firearms in Talitay. (SunStar Zamboanga)