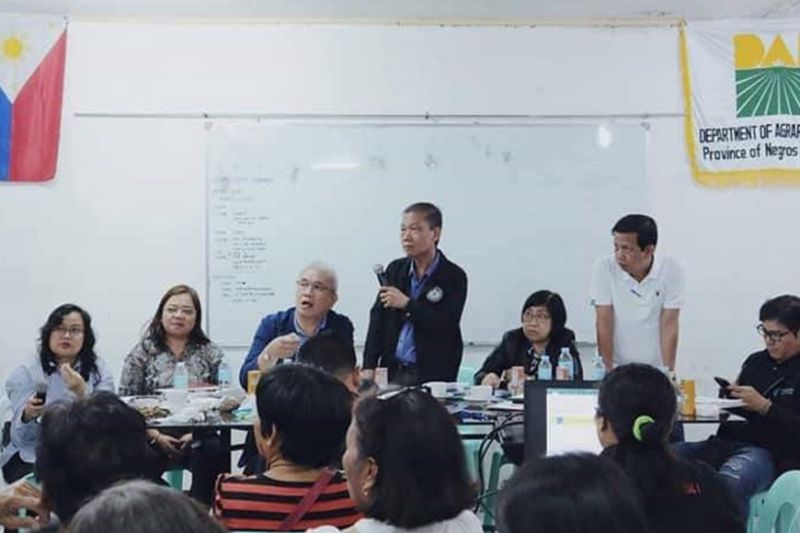 BACOLOD. DAR officials led by Undersecretary for Field Operations David Erro (standing) address the issues and concerns raised by the members of ECJ Cloa Holders and Farmworkers Association (Echafawa) - Magsasaka in a dialogue held at DAR-Negros Occidental I in Bacolod City on Friday, February 21, 2020. (Contributed Photo)

FARMERS tilling the land formerly owned by Eduardo Cojuangco Jr. (ECJ) in Negros Occidental have asked the Department of Agrarian Reform (DAR) to expedite the parcelization of awarded lands, which are currently under the Joint Venture Arrangement with the beneficiaries of the Comprehensive Agrarian Reform Program (Carp).

DAR Undersecretary for Field Operations David Erro held a dialogue with farmer-representatives of the ECJ Cloa Holders and Farmworkers Association (Echafawa) - Magsasaka at DAR-Negros Occidental I in Bacolod City on Friday, February 21, 2020.

At least 300 association-members in southern portion of the province pushed for the parcelization of the 4,300-hectare Cojuangco farms.

The land covers some 1,800 agrarian reform beneficiaries (ARBs) in various localities in the province including cities of Himamaylan, La Carlota and Bago, and towns of Pontevedra, Hinigaran, La Castellana, San Enrique and Isabela.

The regional line agency, however, pointed out that existing legal hindrances covering the landholdings must be resolved first before tackling and addressing the issue on parcelization as appealed by Echafawa-Magsasaka group.

To speed up the process and while waiting for the resolution of all existing legal impediments, Erro instructed DAR-Negros Occidental II to conduct preliminary activities including the inventory of ARBs.

The undersecretary further appealed for the cooperation of farmer group headed by Danilo Gaban in order to expedite the process.

For DAR-Negros Occidental II, Figueroa will direct the Provincial Task Force AVA and its Agrarian Legal Services to review the documents submitted by the farmer group.

This is to assess if there are other possible interventions that could possibly be extended to the association, he added.