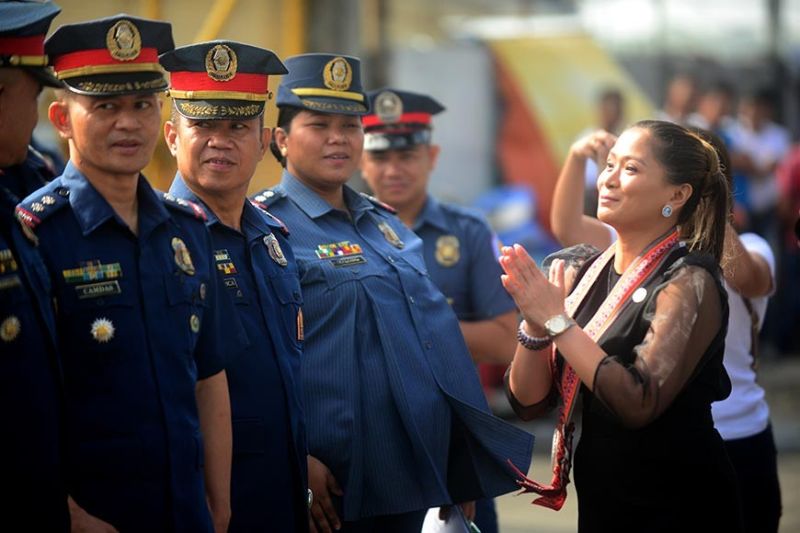 ILOILO. Iloilo City Representative Julienne Baronda thanks the members of the Police Regional Office-Western Visayas for making sure Western Visayas is safe, secure, and one of the most livable cities in the couns try during the 29th Philippine National Police Foundation Day celebration at Camp Marting Delgado on Monday, February 24, 2020. (Leo Solinap)

In her speech, Baronda said that in the Philippines, no matter the administration or political climate, police scrutiny is as sure as death and taxes.

"But through the years, more than 100 years as the police organization, and 29 years if we're talking about the establishment of the Philippine National Police -- the PNP has made great strides in reinventing itself as an institution," Baronda said.

She said while no organization is exempt from rotten tomatoes, "the PNP has gradually ridden itself of the few bad ones that take the luster off the hard work and sacrifices that the majority, like you, have put in, in the name of love of country and love of fellowmen."

"Remember, you will always be criticized no matter what you do and however you do your job -- it comes with the territory," she said.

She added that is part of public service and the oath the PNP took with God as a witness.

"But also remember that only you can change how people look at you, your uniform, and your badge," she said.

Baronda stressed that everything starts within the police integrity, "the willingness to be part of the solution rather than the problem, the selflessness and grows outward."

She said with these statements, the PNP has collectively overhauled the image of the PNP.

"The government definitely recognizes you as a vital cog in the effectivity of our law and justice systems. Personally, I understand the role of peace and order in progress. That is why I made it a point to include it in my battle cry 'Hope' and I made that because I have ultimate trust and gugma (love) in the PNP organization," she added.

Baronda said she is pleased that the administration has taken good care of the police organization, from providing increases in their salary, making sure the policemen to pistol ratio is at 1:1, and purchasing enough police cars and other equipment to make sure they carry out their duty on the field as efficiently as they possibly can.

"That said, the government is also straightforward in dealing with erring uniformed personnel. It is true that to whom much is given, much is also expected," she said.

Baronda told the police that they have a friend in Congress.

She said that before her first term ends, she will make sure that she has contributes to the organization to help make the PNP more effective and efficient.

"I have introduced a bill institutionalizing anti-drug abuse councils in provinces, cities, municipalities, and barangays," she said, adding that this bill will ensure the fight against illegal drugs is sustained no matter who is in the government.

"We will also work to provide legal assistance to cops facing cases in the performance of their duty. There is a bill filed in the House and I will certainly support this measure," she said.

Baronda said she has facilitated funds for the construction of one sub-station in Lapuz District and another one in Jaro District.

She also promised to construct more sub-stations in Iloilo City to make the services of policemen closer and responsive to the people.

"We will also work to incorporate modern and digital technology in law enforcement. We must use smart technologies to help you solve crimes and in a quick manner," she said.

Baronda said Police Regional Office-Western Visayas Director Rene Pamuspusan mentioned about the need for a regional command center that will serve as nerve center of the day-to-day operations as well as during crisis or calamities.

"Towards this end, I asked the help and support of my fellow congressmen in Iloilo Province for us to facilitate funds for the construction of PNP Regional Command Center. This shall be included in the 2021 Annual Budget," she said.

Baronda, during her speech, offered a minute of silence and then said: the "wreaths we offer to them and their memory may be symbolic, but my wish is that the wreaths plant more seeds of valor and patriotism in your hearts as you do your job day in and day out."

Before ending her talk, she also offered a snappy salute "to all of the men and women for the job well-done, for making sure Western Visayas-especially Iloilo City is safe, secure, and one of the most livable cities in the country." (SunStar Philippines)