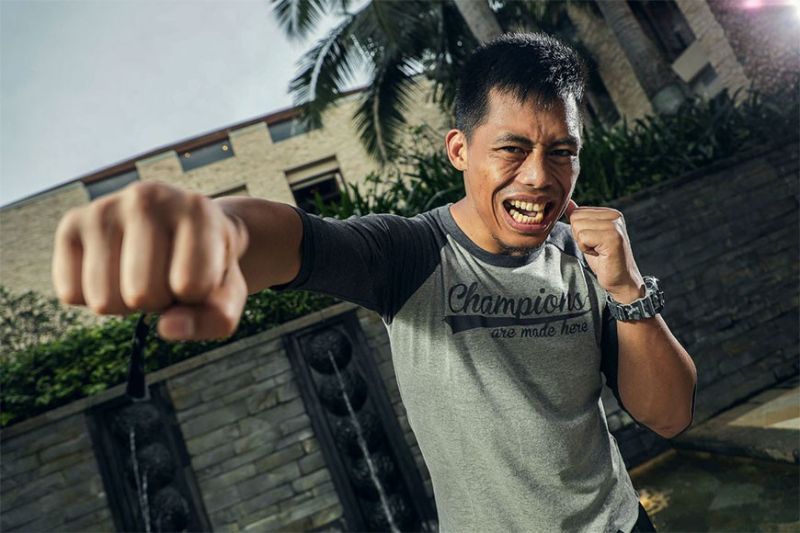 BAGUIO. Honorio Banario stays focused on his goal of returning to the winning circle amid the threat on Covid-19 as he takes on Shannon Wiratchai this coming Friday, February 28, in ONE Championship in Singapore. (ONE Championship photo)

EVEN with the threat on coronavirus disease (Covid-19), Team Lakay’s Honorio Banario is keeping at the positives of his bout in Singapore this coming Friday in ONE Championship.

The former ONE featherweight world champion with coach Mark Sangiao boarded for Singapore Monday amid global fears Covid–19 although the event will be closed off to fans and media, according to chairman and chief executive officer Chatri Sityodtong.

“There’s nothing to worry. I think ONE Championship has already put in place measures that will protect not only the fighters but also other stakeholders,” Banario said in local dialect.

Sityodtong made the announcement to convert their event in Singapore to a closed-door event initially on his social media accounts.

“In light of the coronavirus situation in Singapore, I have made the decision to convert ONE: King of the Jungle on February 28 into a closed event for broadcast only. The Singapore Indoor Stadium will not be open to the general public, but the event will proceed behind closed doors as scheduled live on all TV and digital platforms across 150+ countries around the world,” Sityodtong wrote on his official Facebook page.

Fans who purchased tickets to the event will be given a full refund through Sportshub Tix, ONE’s official ticketing partner in Singapore. All bouts are to proceed as scheduled, and will still be available live via TV and digital platforms worldwide, as well as through the ONE Super App.

ONE world champion Stamp Fairtex of Thailand will defend her atomweight kickboxing world title against Janet Todd of the United States in the main event.

In the co-main event of the evening, reigning ONE strawweight kickboxing world champion Sam-A Gaiyanghadao of Thailand will take on Lachlan Ogden of Australia for the ONE strawweight Muay Thai world title.

Banario will take on Shannon Wiratchai in a clash of potent strikers who are hungry to make an impact in their return to the featherweight division in the stacked ‘King of the Jungle’ slated February 28 at the Singapore Indoor Stadium.

Although these men rarely engage in toe-to-toe battles, they are not afraid to throw heavy leather. Both have concussive power and tend to try to control the range before exploding into action.

Wiratchai’s unique style draws from a smorgasbord of striking arts – including kung fu, Muay Thai and boxing – but it works. He likes to feint to find gaps to land powerful strikes and his reward has been five knockouts on the global stage.

Banario is a wushu stylist who is more content to wait for his opponent’s attack to launch a counter, just like he did when he finished Jaroslav Jartim with a clean left hook at ONE: Kings of Destiny.

This means fans should expect a finely-balanced game of inches between two high-level stand-up martial artists – but one that is primed to deliver a knockout in a split-second.