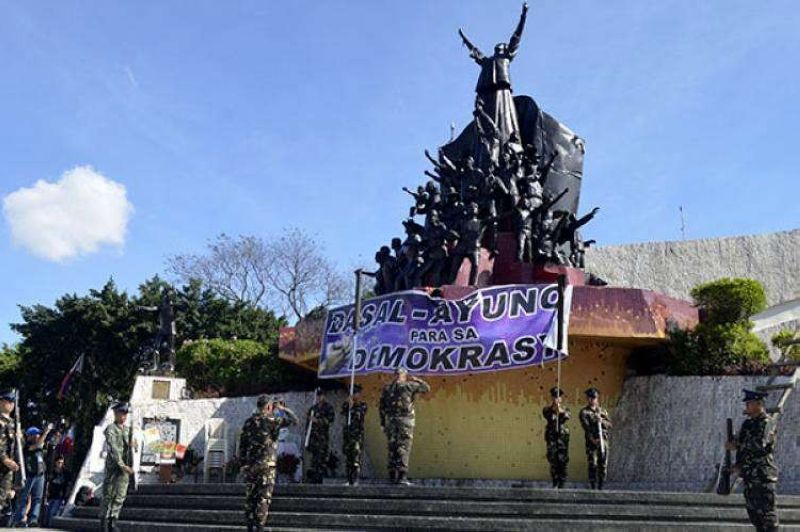 ON THE 34th anniversary of the People Power Revolution Tuesday, February 25, President Rodrigo Duterte called on the nation to "rise above our petty political differences" to ensure that the legacy of Edsa will remain relevant.

The President issued the statement a day after Senator Christopher "Bong" Go, a former aide who still accompanies him to some official and personal events, revealed during a Senate hearing Duterte's grievances against television network ABS-CBN.

The network's application for franchise renewal remains hanging in the air, with the House of Representatives planning to deliberate on related bills in May or August 2020 yet.

During the hearing Monday, February 24, Go questioned television network ABS-CBN for not airing some advertisements promoting Duterte as a presidential candidate during the 2016 elections.

Go said the network instead aired a video paid for by the camp of former senator Antonio Trillanes IV, one of the President's most vocal critics.

The video, which was presented during the hearing, showed children questioning Duterte who issued a death threat and cursed the pope, among others.

Go said the video, which he described as black propaganda, was "obviously meant to malign then presidential candidate Mayor Rodrigo Duterte for the purpose of destroying his reputation and turning the tide against his overwhelming popularity that time."

Go said Duterte was hurt and dehumanized by the ad.

A court issued a temporary restraining order to stop the airing of the video.

ABS-CBN president and chief executive officer Carlo Katigbak apologized for the network's failure to air some of Duterte's ads.

He also said airing of ads is based on a first come first served policy.

Go said the President did not accept the refund.

In a statement issued Tuesday, Duterte said the People Power Revolution in 1986 "remains as, beyond doubt, one of the most remarkable events in our nation's history".

He acknowledged that the bloodless uprising, which ousted the late dictator Ferdinand Marcos, played an "important role as a catalyst for the restoration of our democratic institutions".

The President expressed hope that the "succeeding generations of Filipinos will also have the courage, strength and determination to protect, defend, and preserve the liberties that we have won during the historic revolution."

"Inspired by the freedoms that we secured in February 1986, let us all rise above our petty political differences so that we may, together, ensure that the legacy of EDSA will remain relevant in the years ahead," he added. (MVI/SunStar Philippines)