2 repatriation flights for over 400 Filipinos in Japan 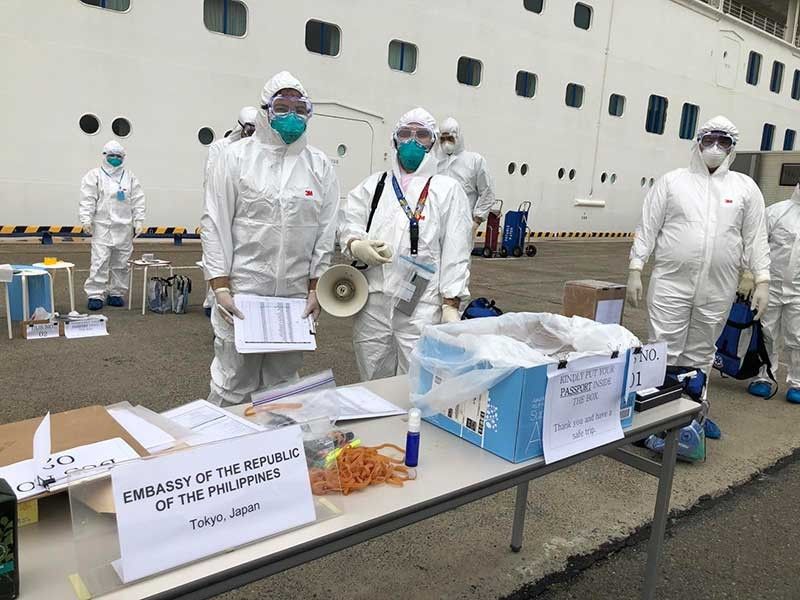 JAPAN. Philippine officials and medical team are facilitating the disembarkation of over 400 Filipinos from the coronavirus-hit cruise ship MV Diamond Princess in Yokohama, Japan on February 25, 2020. (Photo from DFA)

(UPDATED) Two repatriation flights are bringing home Tuesday, February 25, over 400 Filipinos who were on board the coronavirus-hit cruise ship MV Diamond Princess in Japan.

It arrived at the Haneda Airport in Tokyo, Japan at 3:14 p.m., Tuesday. On board is DFA's Rapid Response Team.

The second flight left for Japan shortly after noon Tuesday, with Angela Tolentino and Chareloa Marcial of the DFA-Office of the Undersecretary for Migrant Workers Affairs as part of the repatriation team. It arrived at the Haneda Airport after a nearly four-hour travel from Manila.

Meanwhile, officials of the DFA and Philippine Embassy in Tokyo as well as a medical team from the Department of Health were facilitating the disembarkation of the Filipinos from the cruise ship Tuesday morning.

The ship, which is docked in Yokohama, was placed under quarantine until February 19, 2020.

As of Tuesday, Dulay said the Philippine Embassy in Tokyo said 80 Filipinos who were on board the cruise ship tested positive for Covid-19, the respiratory disease caused by the novel coronavirus.

Of the 80, 10 have been discharged from the hospital and given a clean bill of health.

Over 500 passengers and crew of the cruise ship have been found positive for the coronavirus and brought to various hospitals in Japan for treatment.

Worldwide, the coronavirus has infected a total of 79,331 persons as of February 24, 2020, with 2,618 deaths including 23 outside of China, according to the World Health Organization. (MVI/SunStar Philippines)