Syrian father teaches daughter to laugh when the bombs fall 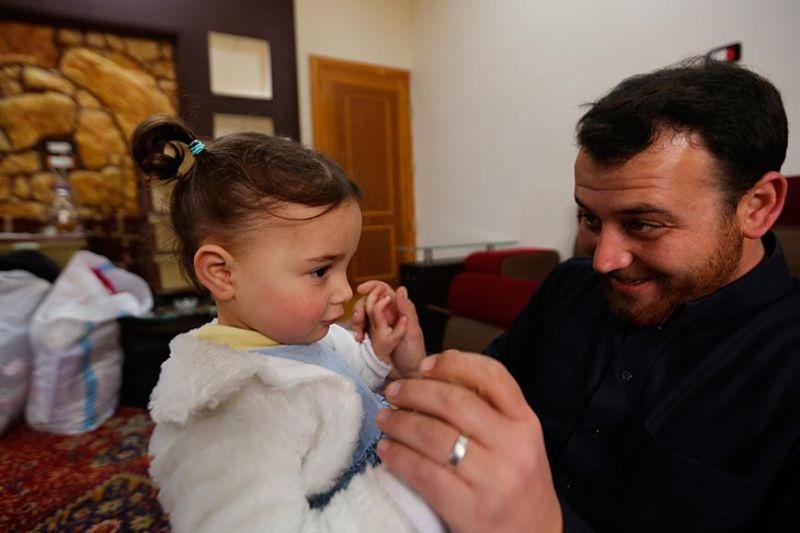 SYRIA. In this Sunday, February 23, 2020 photo, Abdullah Mohammed plays with his daughter, three-year-old Salwa inside a house he recently fled to, near the Syrian-Turkish border, in Sarmada, Syria. Mohammed would do anything for his daughter, even if that means forcing himself to laugh with her at the sound of exploding bombs, to help her overcome her fear. Mohammed and Salwa became an overnight celebrity after a video they shot spread on social media, widely shared as a reminder of the horrors faced by children in Syria. (AP)

BEIRUT — Abdullah Mohammed would do anything for his daughter, even forcing himself to laugh with her at the sound of bombs to help her overcome her fear.

In Idlib, that's a lot of laughter.

The province in northwestern Syria is the last opposition-held stronghold in the war-ravaged country. It has been the subject of a ferocious military campaign and relentless bombardment by Russia-backed Syrian government troops since early December. More than 900,000 civilians have been on the move since then, displaced from their homes. Many now live in tents, abandoned buildings, makeshift shelters and in open fields near the Turkish border.

As the advancing troops neared his hometown of Saraqeb two months ago, Mohammed fled with his wife and daughter further north to the town of Sarmada, where they are now staying in an abandoned house offered to him by a friend.

Mohammed and his daughter, 3-year-old Salwa, became overnight celebrities after a video they shot was shared widely on social media — a reminder of the horrors faced by children in Syria. In the video, Salwa, wearing a pink dress, stands on a sofa next to her father.

Mohammed asked his daughter: "Is that a plane or a shell?"

"A shell, and when it falls we will laugh!" she replied.

As the boom of the explosion is heard in the distance, the little girl jumps slightly and then bursts into hysterical giggles as her father laughs along and says: "It's funny, right?"

Mohammed said he came up with the game to help his daughter cope with her fear.

Salwa had been hearing bombs all her life. As a baby there was no fear, but that changed after her first year. One day, they were at home in Saraqeb during Eid al-Fitr, the three-day Muslim holiday that marks the end of the holy month of Ramadan. Children outside were celebrating with fire crackers, and a big one exploded nearby.

"She was frightened, but I took her out and showed her that children were playing and laughing ... she was convinced," he recalled. That was how he got the idea to connect the sound of bombs with laughter and kids playing, and to film himself laughing with her every time warplanes hit.

He said now every time they hear the jets or outgoing artillery shells, Salwa turns to him and waits for his reaction. He pulls out his cellphone for a selfie video and they wait for it — and then they burst into laughter.

On a recent day, Mohammed sat watching Salwa as she played with plastic Lego bricks, her hair in pigtails and wearing a blue dress. He said the war has wiped out the hopes and dreams of his generation and those of their children.

"The most I hope for is to stay alive, along with my daughter and everyone else," he said. "We forgot about the bigger hopes, they don't exist anymore.”

Mohammed gets emotional talking about it. He says he realizes the bombs they're laughing about could be ending someone's life at that same moment.

"Maybe it hit a tent or a child, and this is not funny of course. This is very sad. But I'm laughing so that my daughter doesn't get affected by this. And if the shell were to fall on us, better that we die laughing than to die scared." (AP)