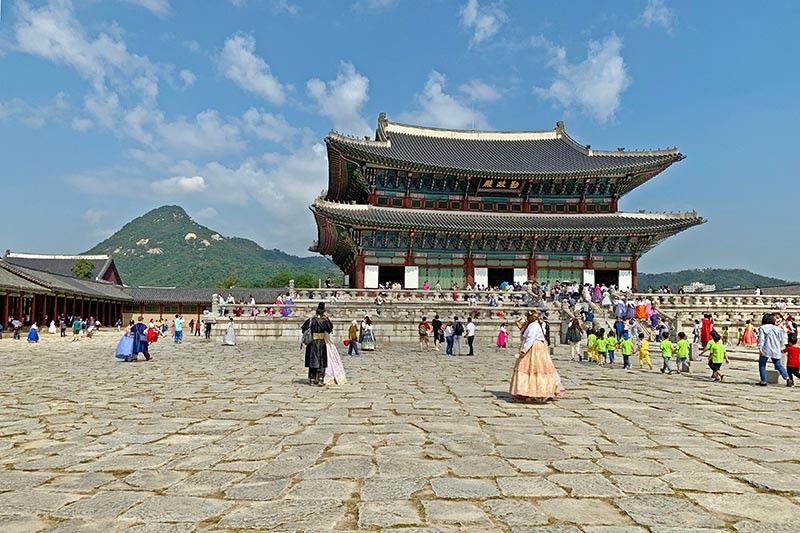 GyeongbKOREA. Geunjeongjeon (Imperial Throne Hall, National Treasure No. 223) of Gyeongbokgung Palace with Mount Bugaksan as its backdrop. (Jinggoy I. Salvador) 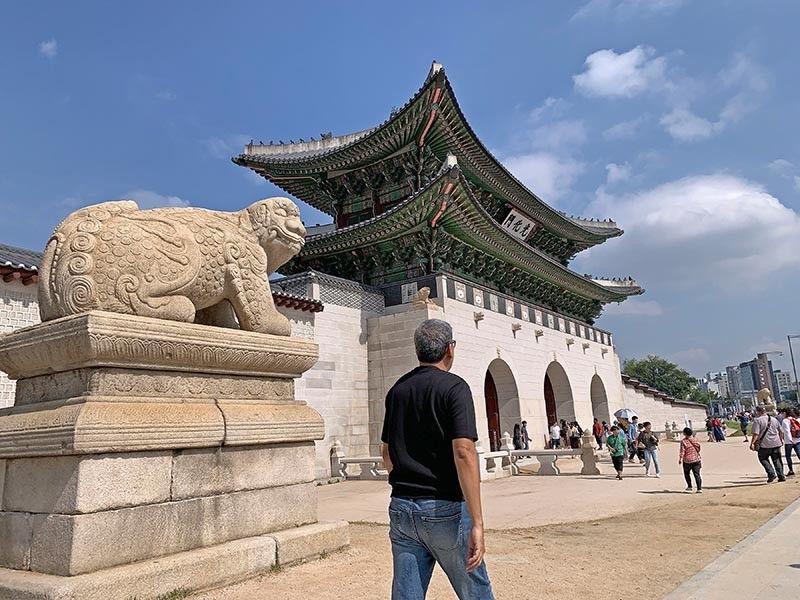 KOREA. Guarded by a Haetae Gwanghwamun Gate is the main and largest gate of Gyeongbokgung Palace. (Jinggoy I. Salvador) 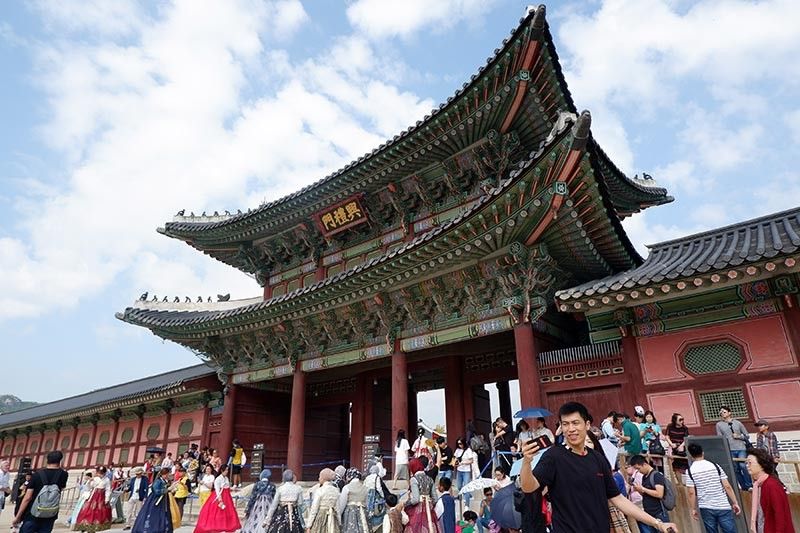 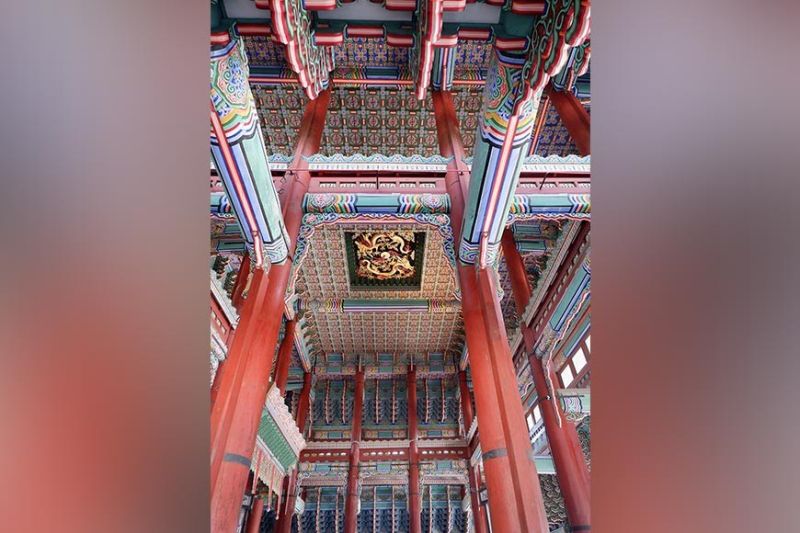 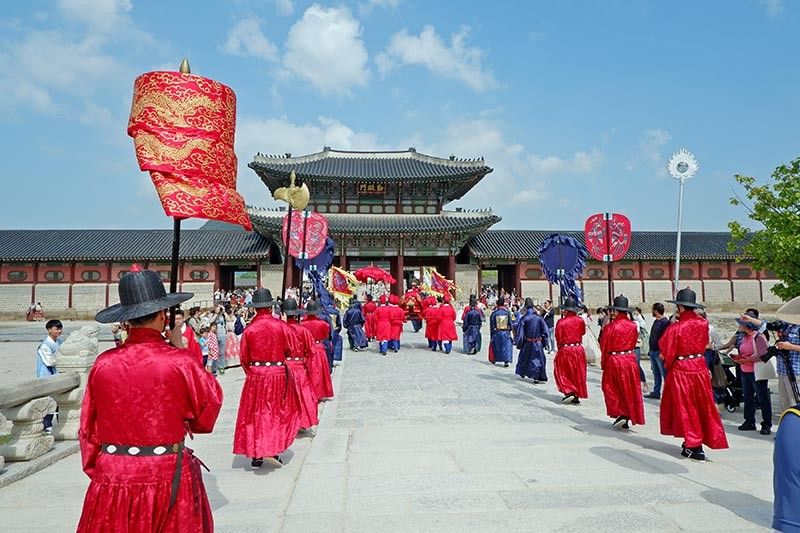 THE Palace Greatly Blessed by Heaven -- Gyeongbokgung, the largest of the Five Grand Palaces of the Joseon Dynasty built in 1395, three years after Yi Seong-gye (King Taejo) founded the new dynasty. It served as the main palace, the home of kings.

Gyeongbokgung Palace sits in the heart of Seoul with Mount Bugaksan as its backdrop. It's a very auspicious site, according to the traditional practice of geomancy. Along the site's central axis is the core of the palace -- the throne hall, the king's residence and the council hall, and outside the Gwanghamun Gate, the Street of Six Ministries (Sejongno today). These formed the heart of the capital city representing the Joseon Dynasty's sovereignty. It steadily expanded years after.

In 1592, during the Imjin War (the Japanese invasion), all the palaces in the capital were razed by fire. A secondary palace was rebuilt, Changdeokgung, served as the main palace.

Geongbokgung Palace was abandoned for almost three centuries. In 1867, by order of the Prince Regent Heungseon during the reign of King Gojong, reconstruction on a grand scale began. About 50 buildings, 7,700 rooms in a site of over 40 hectares were rebuilt. Incorporated into the restored buildings is ancient Korea's architectural principles.

Inside the palace walls were the oejeon (Outer Court), the king's and state officials' offices, and the naejeon (Inner Court) holding the royal family's living quarters and gardens. The surrounding precincts held other palaces, including the Donggung and Junggung, the Crown Prince's and queen's residences, respectively.

In the early 20th century, another unfortunate event struck the palace. Korea came under Japanese rule. After the Korean Empire was officially annexed by the Japanese in 1910, all but 10 buildings were systematically destroyed to accommodate Japanese-hosted exhibitions. Further damage happened to the palace during the Korean War in 1950.

In 1990, a 40-year restoration plan was implemented. Step by step, components of Gyeongbokgung's walled palace complex were restored to its original state. Completely reconstructed are the Heungnyemun Gate (2001), Gwanghwamun Gate (2010), and the Inner Court and Crown Prince's residence.

Back in its former glory, Gyeongbokgung is once again praised as the grandest and most beautiful of the five palaces today. Two other attractions are added to the list of the complex's buildings -- the National Palace Museum of Korea and National Folk Museum.

You know what makes the place grander in this time and age? It's one of the settings of a several Korean dramas to become one favorite destinations of hanbok-wearing tourists reliving the scenes from their favorite shows.

For more photos about this feature and other travel stories, visit www.jeepneyjinggoy.com.