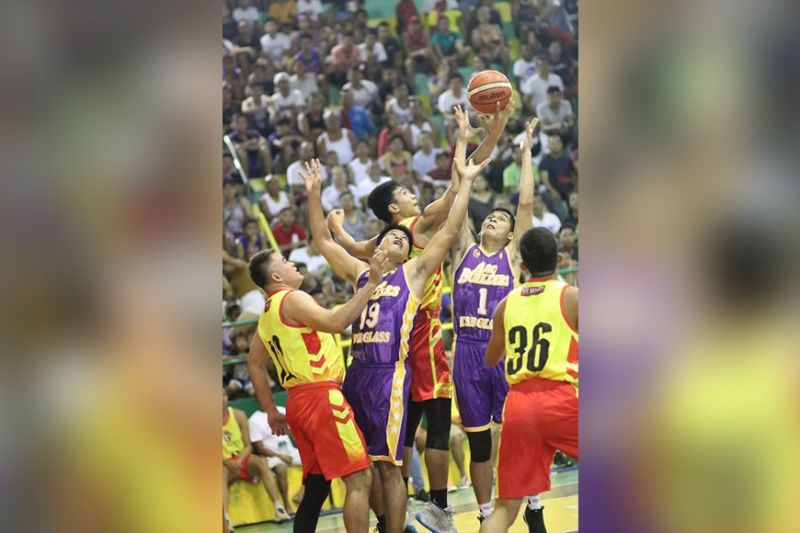 EVERY POSSESSION COUNTS. Five players battle for a rebound in the game between the ARQ Builders-KSB and the Fighter 50 in the semifinals of the Mayor Edgardo C. Labella 1st Charter Cup Basketball Tournament. (Sunstar Photo / Amper Campaña)

THE Kiboy’s Computer Solutions (KCS) overcame a slow start to defeat ASPA, 75-68, while the ARQ Builders-KSB upended the Fighter 50, 85-77, in the semifinals of the Mayor Edgardo C. Labella 1st Charter Cup Basketball Tournament at the Cebu City Sports Institute on Monday night, Feb. 24, 2020.

The two teams were duking it out for the Charter Cup crown and the grand cash prize of P150,000 as of this writing.

KCS got off to a horrific start and trailed, 6-15, but eventually found their bearings to take a 20-19 lead after back-to-back baskets by Baruk Ceniza. ASPA continued to hang in there and took a 37-36 lead at halftime.

However, KCS finally asserted their superior skill in the third, which they opened with a 13-4 salvo capped off by consecutive jumpers by University of the Visayas stalwart Froiland Maglasang for a 49-41 lead, 3:10 to go in the third.

In the fourth quarter, KCS poured it on as Vincent Minguito kicked things off with a three-pointer that raised their lead to its highest of 14, 57-43. ASPA trimmed the deficit down to just five, 54-59, after a driving lay-up by Jestoni Baclaan, but KCS’ big men answered right back with a three-point play by Edrian Lao and a free-throw by Rino Berame that brought their lead back to nine, 63-54.

ASPA pulled to within five, 63-68-67, after two free throws by Kenneth Niones with 1:27 remaining in the game, but that proved to be their last hurrah as Lao and Berame came up with clutch shots to put the game out of reach.

Lao led the way for KCS with 17 points, five rebounds and three assists while Berame had a double-double of 12 points and 14 boards.

Meanwhile in the other semis game, ARQ-KSB dominated the first three periods and was already ahead by 19, 63-44, at the start of the fourth before Fighter 50 made a decent run near the end to bring the final score down to a respectable margin.