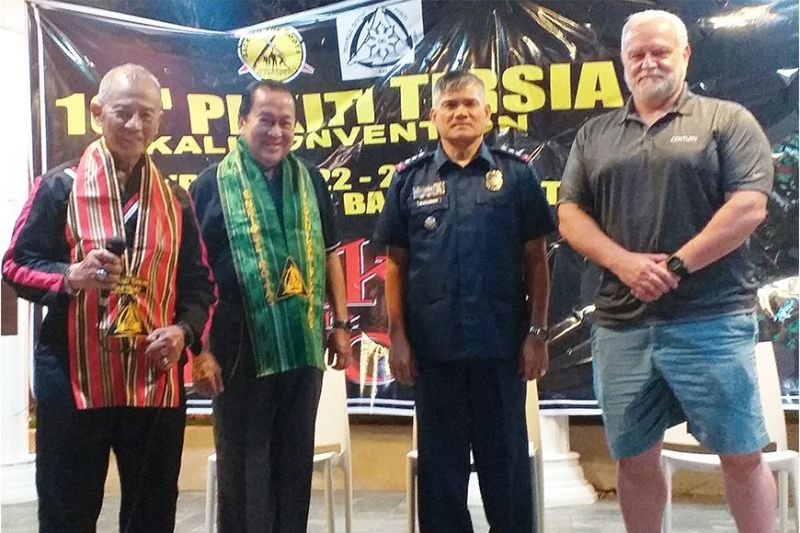 “This convention reiterates our continuing drive to enhance the capabilities of our trainors and practitioners, primarily to protect our lives, the lives of our families and the lives of other people from violent threats,” said Leo T. Gaje, Jr., the Grand Tuhon Supremo (Supreme Grandmaster) of Pekiti Tirsia.

About 50 practitioners joined the convention, which usually draws more than 200 participants. The corona virus travel bans, however, prevented other members from coming to this year’s gathering, said Gaje.

This distinctly Filipino martial arts focuses on close quarter combat with the use of bladed weapons, sticks or bare hands. It is a secret family fighting style, handed down from one generation to another, to protect the practitioner, his family and his property from aggression.

Pekiti Tirsia traces its roots to the turn of the 19th century, practiced by the Tortal brothers who were originally from Panay but who settled in Negros.

Conrado Tortal, the grandmaster of the art and the grandfather of Gaje, taught him all the secret family styles since Gaje was six years old.

In the 1970s, Gaje introduced the art to members of the New York Police Department, who found the disarming techniques and chokeholds particularly effective in battling petty street thugs in the city.

The system quickly caught on, as even the police, military, special forces and martial artists from more than 25 countries trained under the unique Filipino fighting style, which emphasizes counter-offense summarized in the term COMBAT or Counter Of Motion Before Attack Time.

Last year, Gaje, together with fellow Kali legend and guru Dan Inosanto, were bestowed the Lifetime Achievement Award in Martial Arts during the Martial Arts Supershow in Las Vegas, the biggest international gathering of martial artists which attracts thousands of participants every year.

“Grand Tuhon Gaje is the epitome of a warrior. He is instrumental in bringing Filipino martial arts to the world stage. He is something special, and he has something special to offer to the world. He is an amazing ambassador for the Filipino people, for the country and its culture,” said Paul Webb, president of the Martial Arts Supershow.

A lifelong martial arts practitioner himself who have trained alongside Gaje, Webb flew all the way from Las Vegas to attend the convention upon the invitation of Gaje. Webb is also the president of Century Martial Arts Supply, the global leader in contact sports uniform and equipment.

The convention’s theme, “Back to the Roots”, shows the trajectory for Pekiti Tirsia’s future development and proliferation. Gaje will establish the group’s headquarters at Resorts Negrense, where they will hold regular trainings.

Enrique D. Rojas, owner of Resorts Negrense and president of the National Federation of Sugarcane Planters, welcomed Gaje and his group to the resort.

“Aside from being a premier resort destination with superb food, a swimming pool, watersports and zipline, Resorts Negrense has become a beach volleyball training venue and now a martial arts training center, which promises to be the mecca for Pekiti Tirsia Kali practitioners worldwide. Resorts Negrense is not only for family enjoyment but also for sports activities,” Rojas said.

“We thank Grand Tuhon Gaje for inviting us to be a part of this convention and for sharing Pekiti Tirsia techniques with our police force”, said Negros Occidental Provincial Police Office Director Col. Romeo Baleros.

“Pekiti Tirsia is integrated in the basic training course of aspiring policemen. This martial art is extremely helpful in the discharge of our sworn duties to serve and protect our constituents against criminals. Through its disarming techniques using bare hands and sticks, Pekiti Tirsia allows our policemen to disarm criminals without resorting to the use of firearms,” Baleros added. (PR)