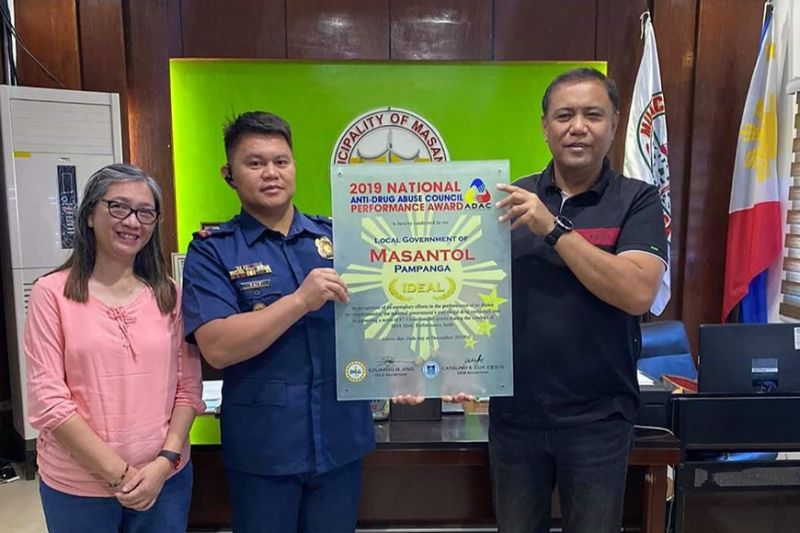 ANOTHER recognition was tucked under the belt of the local government unit (LGU) of Masantol after it bagged the 2019 National Anti-Drug Abuse Council (Adac) performance award.

The award was bestowed by the Department of the Interior and Local Government (DILG) to the LGU, which showed exemplary efforts in ensuring drug-free communities by complementing the National Government's anti-illegal drugs program through their local Adacs.

The award was based from the scores garnered by the LGUs during the conduct of 2018 Adac Performance Award, wherein Masantol had 87.5 functionality points.

Mayor Danilo Guintu credited the award to the hard work and coordination of the municipal Adac in maintaining communities from illegal drugs.

The municipality, which holds the title as the first drug-cleared town in Central Luzon, has maintained its status for almost three years now.

"This is a result of the collaborative effort of our Madac, composed of our local police, DILG and our barangay officials, which is geared towards our common goal of ensuring that illegal drugs can never infiltrate our town again," he said.

Guintu said the Madac's priority is to ensure that no Masantoleño, especially youth, will be victimized by illegal drugs.

Although drug-cleared, Tait said he maximizes the use of the intelligence unit to identify, locate and properly apprehend drug suspects.

"The status does not make us complacent, rather challenges us to do better in protecting Masantol from the negative effects of illegal drugs," he said.