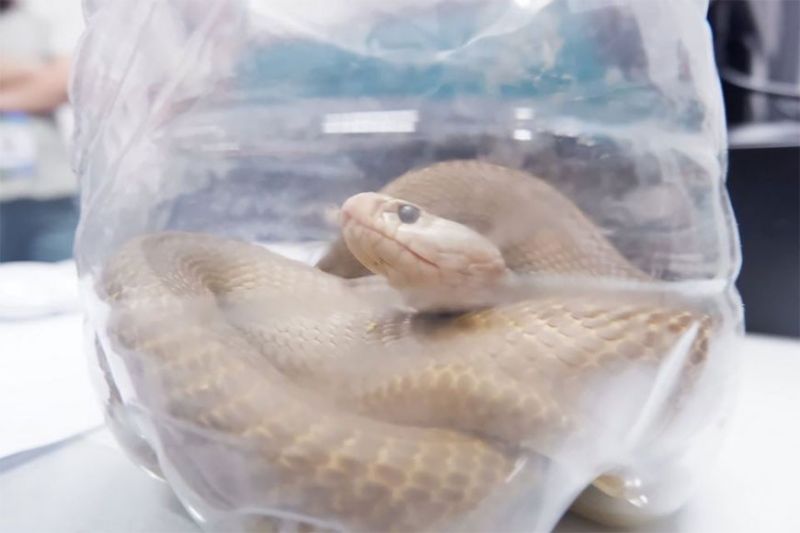 A GROUP of barangay tanods in Barangay Claro M. Recto in Angeles City opted to surrender a threatened Northern Philippine cobra to the Department of Environment and Natural Resources (DENR) in the City of San Fernando Wednesday, February 26.

The barangay enforcers accidentally found the wildlife lurking in a vacant lot in the said village.

Ronaldo Sese, 58, who worked in the veterinary office of Angeles City, said this group of tanods reported to him about the snake they have encountered.

"At first, we thought it was just an ordinary snake, but when I grabbed the head, it started to expand and then we concluded that it was a Philippine cobra," he said.

He said after they caught the snake, they placed it in a five-liter plastic water container and brought it to the veterinary office for temporary safekeeping.

But upon the advice of Dr. Christian Arcilla, city veterinarian, they immediately called the DENR regional office in Pampanga for the proper turnover of the wildlife, said Rodolfo Cruz, 62, who also worked at the city veterinary office.

Jenny Raissa Lico, chief of the Protected Area Management and Biodiversity Conservation Section of the DENR regional office, confirmed that the snake is a Northern Philippine cobra.

"Upon examination, we found out that the adult cobra measures one meter long and weighs about a kilo. It was healthy and fit for release to the wild after the diagnosis made by our staff," she said.

According to the International Union on the Conservation of Nature (IUCN), the Northern Philippine Cobra is listed as threatened species. The species thrive in lowland and up to 800 meters above sea level (asl) and is endemic to the Philippines, which can be found in Luzon islands, Mindoro, Masbate and Marinduque, the report added.

The DENR appealed to the public to report to authorities any suspicious wildlife trading activity including illegal hunting.

Collecting, hunting and possessing wildlife without permission is a violation of section 27 of Republic Act 9147 or the Wildlife Resources Conservation and Protection Act that carries a penalty of maximum six months of imprisonment and a fine of up to P50,000, if inflicted or undertaken against species listed as other threatened species.

Intensified wildlife information campaign of the DENR last year resulted in the surrender of 37 species of reptiles, birds and mammals.