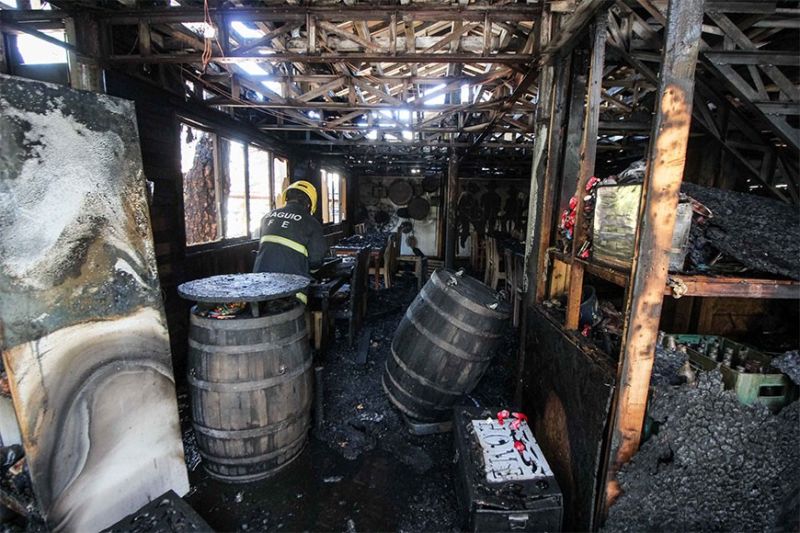 BAGUIO. Firemen investigate the cause of fire at a restaurant and a residential house fronting the Presidential Mansion along Lualhati Barangay Wednesday morning. Luckily, no one was injured during the fire. (Photo by Jean Nicole Cortes)

FIRE operatives have yet to determine the source of the fire that gutted a two–story restaurant at Lualhati Barangay, Baguio City.

Paeng Valencia, 911 on Call chief, said they responded to the call around 9 to 9:20 a.m. of February 26 located in front of the Presidential Mansion near Wright Park.

“We responded to the call at about 9 a.m. and were on standby for possible medical assistance for any victims which turned out to negative. The fire allegedly started between 8:30 and 9 a.m.,” Valencia said.

Senior Fire Officer 2 Camilo Balancio, Baguio City Fire Department public information officer, said as of 2 p.m., members of the fire investigation team have yet to release the official details of the incident.

“We are still awaiting the results of the ongoing investigation by our fire investigators regarding the fire incident at Barangay Lualhati,” Balancio said.

Fire investigators said no one was hurt during the incident.

The Baguio Fire Department (BFD) earlier reported a significant increase in the number of fire incidents in the city this 2020 with 26 compared to only 10 fire incidents registered during the same period last year.

BFD reported there were only 20 grass fires last year but for the first 40 days of this year, there had been 21 grass fires attended to by firefighters from the central station and the different substations in the city.

The local government is eyeing the construction of additional fire substations in the Pacdal, Loakan and Crystal Cave areas to boost the timely response of firefighters to fire incidents within their areas of jurisdiction. (With a report from Baguio City Public Information Office)