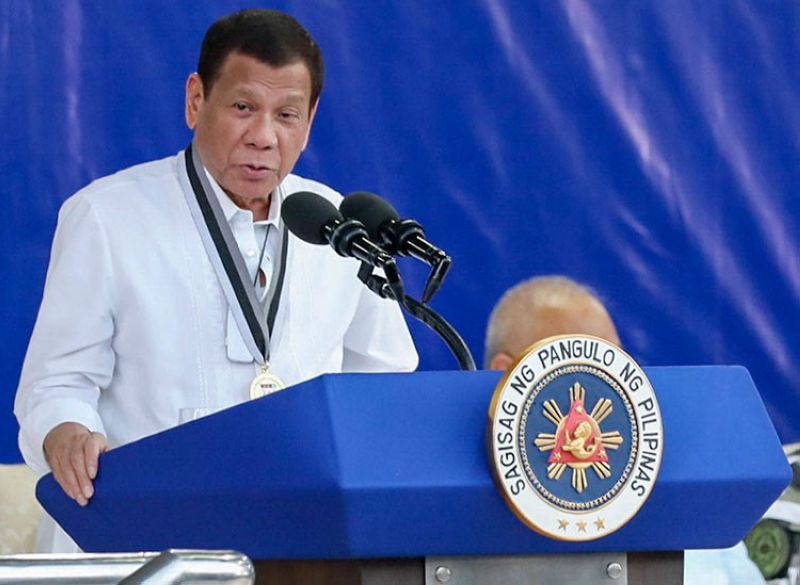 PRESIDENT Rodrigo Duterte said Wednesday, February 26, that Filipino forces can fight insurgents and Muslim extremists without American military help, in a defense of his recent decision to terminate a US security pact.

Duterte also said in a speech that he would stick to a decision made early in his presidency, when he was enraged by then President Barack Obama’s criticism of his deadly anti-drug crackdown, that he will not travel to the United States.

The brash Philippine leader has often criticized US security policies while praising China and Russia since taking office in mid-2016 for a six-year term.

US President Donald Trump invited Duterte to join a meeting he will host for leaders of the Association of Southeast Asian Nations in Las Vegas next month. Duterte has better relations with Trump than with Obama, but his remarks Wednesday support an earlier statement by his spokesman that he would not attend the Las Vegas meeting.

"Do we need America to survive as a nation?" Duterte asked. "Do we need ... the might and power of the military of the United States to fight our rebellion here and the terrorists down south and control drugs?"

“If we can’t do it, we have no business being a republic,” Duterte said. “You might as well choose. We can be a territory of the Americans or we can be a province of China.”

The Philippine government notified the US two weeks ago that it intends to end the Visiting Forces Agreement, which allows American forces to train in large numbers in the Philippines, in the most serious threat under Duterte to the two nations' 69-year treaty alliance.

The termination takes effect after 180 days unless both sides agree to keep the VFA. The waiting period allows the allies to renegotiate contentious terms of the 1998 agreement.

The accord allows the entry and temporary stay of American forces along with US military ships and aircraft for joint training with Filipino troops. The maneuvers include annual drills that Philippine security officials have credited with helping beat back communist insurgents nationwide and Islamic State group-aligned terrorists in Mindanao.

The VFA specifies which country has jurisdiction over American soldiers who are accused of crimes while in the Philippines, a sensitive issue in the former American colony.

US Secretary of Defense Mark Esper has called the decision by the Duterte administration “unfortunate.” Trump, however, reacted dismissively, saying, "If they would like to do that, that’s fine. We’ll save a lot of money."

Foreign Secretary Teodoro Locsin Jr., who signed the notice of termination at Duterte’s direction, has proposed a review of the agreement to fix contentious issues instead of abrogating it.

Duterte threatened to terminate the agreement after Washington reportedly canceled the US visa of a loyal ally, Senator Ronald dela Rosa, who was linked to human rights violations when he enforced the president’s deadly anti-drug crackdown as national police chief in 2016.

Duterte gave the US a month to restore dela Rosa’s visa, but US officials have not publicly reacted to his demand.

Thousands of mostly poor suspects have been killed under Duterte's campaign against illegal drugs, alarming the US and other Western governments and human rights groups.

senator and being incapable of investigating extrajudicial killings.

“We were being portrayed as a republic incapable of administering simple justice,” Duterte said. (AP)