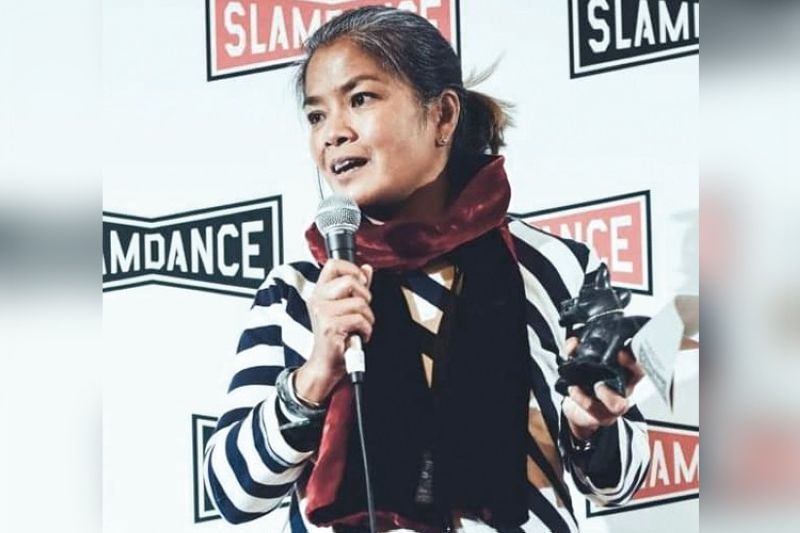 “PEOPLE told me about ‘Buwa,’ the pig inside the earth. When angry, they say the earth trembles. People then shout “Buwa! Buwa!” during an earthquake to calm the pig inside. But I never heard any stories on how to calm the winds of the typhoon nor how to prevent a storm surge.”

This was the 54-second teaser of film essay, “To Calm the Pig Inside (Ang Pagpakalma sa Unos)” by Cebuano filmmaker Joanna Vasquez Arong. The film had its world premiere at the 26th edition of the Slamdance Film Festival and received the Documentary Short Grand Jury Prize.

Written, produced and directed by Arong, the contemplative film tells a personal insight about the effects caused by Typhoon Haiyan—known in the Philippines as Super Typhoon Yolanda—particularly the devastation in Tacloban City and Guiuan, Eastern Samar, shot in black and white with stills and footages depicting the aftermath and the human condition.

Posted on To Calm the Pig Inside’s Facebook page is a photo of an envelope with the words Documentary Short Grand Jury Prize taped to it next to a Sparky trophy with the words: “What a way to end an amazing week, spending time with other filmmakers & the entire Slamdance family & Park City friends ... This film’s been such a loooong journey and so grateful to be able to finally share this story with the world. Thank you for the recognition Slamdance Film Festival! Still in a bit of a daze... #slamdance2020 #tocalmthepiginside #oldfoolfilms.”

The Slamdance Film Festival was created in 1995 and is a platform for up-and-coming filmmakers and lives by its mantra: “By Filmmakers, For Filmmakers.” Some of the notable alumni who have shown their early works at Slamdance include Jon M. Chu (“Crazy Rich Asians”), The Russo Brothers (“Avengers: Endgame”) and Lena Dunham (“Girls”). It takes place annually in the ski resort town of Park City, Utah for people in the industry to mingle and discover a new breed of talented creatives.