US swim coach: Be the best version of yourself 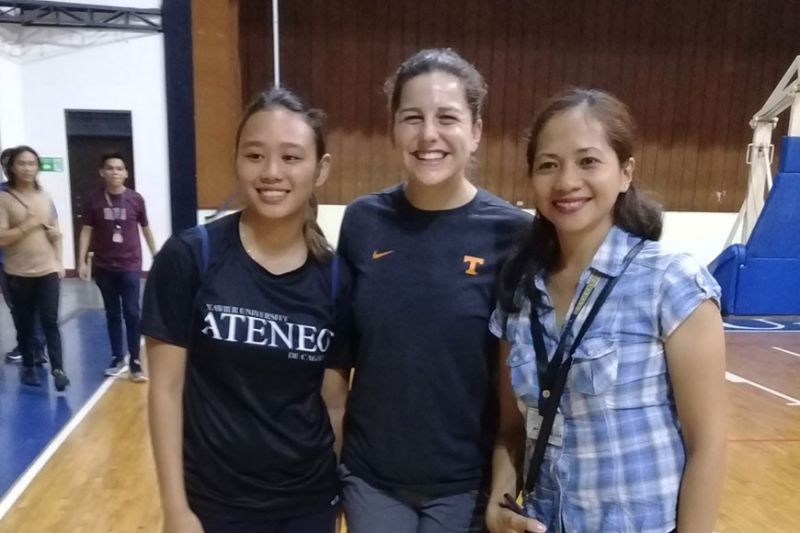 CAGAYAN DE ORO. Ex-elite American swimmer Brianna Leverenz poses with XU's part-time swim trainer We April Gerona and her student after her last talk of the weeklong sports for cause on February 21 at the Xavier University gym, Cagayan de Oro City. (Contributed photo)

"BE THE best version of yourself."

This was the parting line left by ex-American swimmer Brianna Leverenz to the varsity scholars of Xavier University as she ended her week-long "sports for a cause" swimming seminar on Friday, February 21, in Cagayan de Oro City.

The 22-year-old Leverenz narrated how swimming molded her life for 17 and a half years when she started at age 4.

The freestyle specialist got her inspiration from her elder sister Caitlin, who salvaged a bronze medal in the 2012 Olympics for the US swimming team.

Leverenz looked at her every single drop of sweat to join her in the US team. That made her to train herself for 35 hours a week of hard work. She was at her best during her high school years when she clocked 1:50.48 in the 200-meter freestyle of the 2013 Arizona division.

But the unthinkable happened. She pushed herself too much that led to shattering her dreams in joining her sister in America's most elite swimming team powered by its icon Michael Phelps.

Her dreams all gone after she was diagnosed of back spinal injury and undergone a surgery. She was sidelined for close to a year.

Leverenz already knew that she could never make her dreams come true, but she never quit her slot in the University of Tennessee swimming squad and kept competing.

Knowing she could no longer be in her best competitive form, she drew an inspiration from her coach who encouraged her to "be the best version of yourself."

"I took my coach's advice seriously. With the surgery telling me a message, my studies is the only thing I could make the best version of myself," said Leverenz to more than 80 XU athlete-scholars.

But, that is just part of it. She made a self-commitment to give back what her sport did to her and joined Athletes for Hope, a US organization of athletes and trainers that intends to connect with athletes from afar for a cause.

"I am still in a journey of making myself more," she said.

Newly-minted XU athletics director Jessica Hojas Esparrago made Leverenz as a model to the varsity scholars.

Esparrago wanted to impart values on how they should handle responsibilities as a student-athlete in XU.

Part-time XU swimming coach We April A. Gerona, a full-time senior high teacher at Misamis Oriental General Comprehensive School (MOGCHS), agreed that varsity members must be fully aware of their duties and obligation as a role model during the games and even outside of the campus.