GUAGUA -- Presidential Merit Awardee for Ecclesiastical Art Wilfredo Layug has set another record as the first Filipino wood carver to have been commissioned by a parish in Spain to create an image of the Virgin Mary for public veneration.

The image of the Santa Maria del Sagragio will be formally sent off in a program this week, as the image is set to make its voyage to the Parish of Nuestro Padre Jesus dela Verda in Malaga.

The work, which was initially supposed to be a commissioned work, ended up as a donation of Layug to the said parish.

"I would rather give it as a donation. We owe so much to Spain in terms of our Catholic faith," Layug, who was also schooled in Spain in the intricate art of carving and painting images, told SunStar Pampanga.

The image will be used for public veneration and processions. The send-off ceremonies will be held at Santiago Apostol Church in Guagua's Betis District on Saturday, February 29.

Layug is famous for his use of traditional polychrome style mixed with an obvious Spanish influence in polychrome technique, something which he has acquired from a recent training in Spain.

The Kapampangan artist from Betis in Guagua is the first Filipino to put up the first ever Filipiniana-inspired altar dedicated to Filipino Saint Lorenzo Ruiz and Blessed Pedro Calungsod at the prestigious Pontifico Collegio Filippino. He has done major retablos, including that at the Cathedral of St. Joseph in Nueva Ecija, the St. John Cathedral in Lingayen-Dagupan, San Sebastian Cathedral in Bacolod and Cathedral of the Immaculate Concepcion in Urdaneta, Pangasinan.

Layug was also named Outstanding Guaguaeño for sculptor, Most Outstanding Kapampangan for ecclesiastical art and Best Actor in the 39th Metro Manila Film Festival for "Dukit," an autobiography of his life as an artist. He is the most accomplished sculptor of his time. 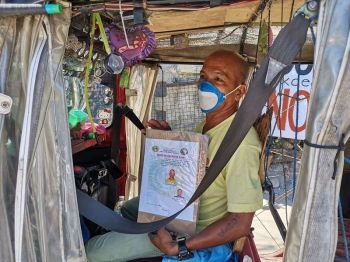