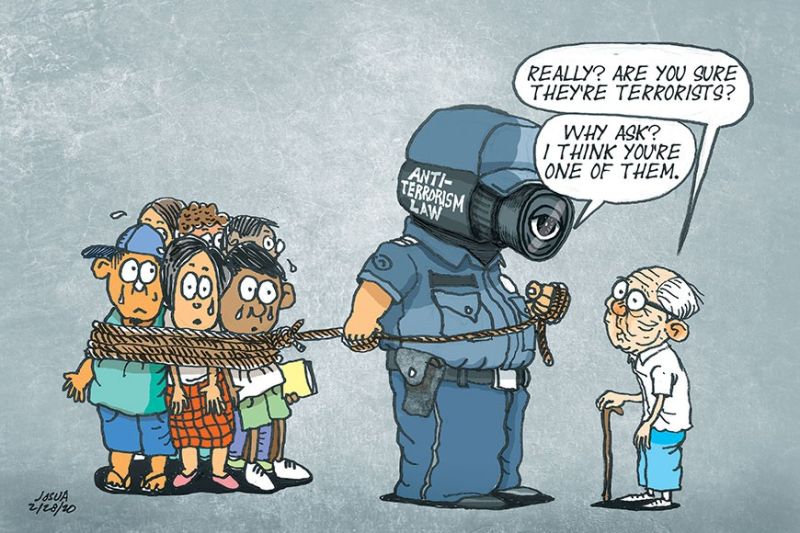 SO it goes. Nineteen senators approved on third and final reading on Feb. 26 Senate Bill (SB) 1083, effectively giving more teeth to the Human Security Act of 2007, which was a watered down version of the 1996 Anti-Terror Act of Sen. Juan Ponce Enrile.

SB 1083 is the Philippines’ response of commitment to international efforts in the fight against terror.

Authored by Sen. Panfilo Lacson, the bill intends to fortify the legal backbone in the fight against terror, equip law enforcers with necessary tools to carry out operations, and safeguard the rights of those accused of the crime.

The law allows the police or military to conduct a 60-day surveillance on suspected terrorists, although this can be lengthened to another non-extendable period of 30 days with judicial authority. A suspected person can be detained without a warrant of arrest for 14 days, or 10 more days if authorities deem it necessary. This happens to be one of the provisions that got the beef of Sen. Francis Pangilinan, who voted with Sen. Risa Hontiveros against the bill.

“The prolonged detention is an impingement of rights and liberty. Why 14 days? If security officials and law enforcers are doing their job, why will it take them long to file a case? Or, is the practice of arrest and detain now, produce or invent evidence later still prevalent, as it was when opposition leader Jovy Salonga was arrested, detained, and charged in 1981? The current law is not perfect, and we, in Congress, should be working continuously to make it work for the people,” Pangilinan said.

Lacson, on the other hand, assures that the bill provides sufficient safeguard to ensure the basic human rights of the accused. The Commission on Human Rights (CHR) shall immediately be notified in case of detention of a suspected terrorist.

The measure also mandates the CHR to give highest priority to investigate and prosecute violations of civil and political rights of persons and to prosecute officials or law enforcers who violate the basic rights of the suspects or detained persons.

The catch, however, is that SB 1083 removed the provision of payment of P500,000 damages per day of detention of persons acquitted of terrorism charges.

Events, however, render the SB 1083 at once timely and yet ill-timed. Timely while extremist terror is breathing down the neck of countries, but ill-timed most especially while we have a government that, while publicly claiming openness, seems at heart intolerant to dissent, indulging itself in a spree of red-tagging, arresting students, academics, social workers, priests and activists.

SB 1083 also comes at a time when government holds the most expensive intelligence work there is as far as budget goes, at a whopping P4.9 billion. With that much arm, we now have a highly omnipresent Big Brother practically watching over its citizens’ shoulders at any given time of the day.

This tilts the balance of power entirely and, if the wrong hands take the rein, might easily endanger our democracy.