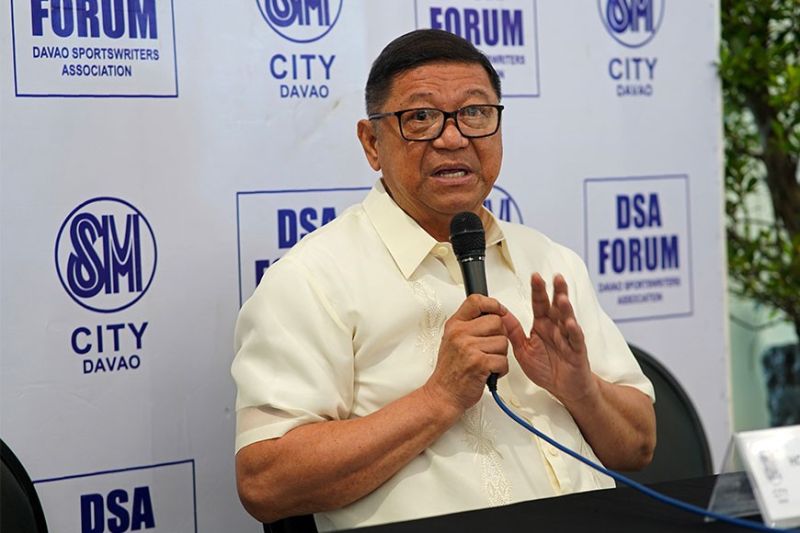 DAVAO. Philippine Sports Commission (PSC) Chairman William Ramirez, during the Davao Sportswriters Association (DSA) Forum at The Annex of SM City Davao Thursday, February 27, 2020 says Filipino athletes continue to train and compete to earn Tokyo 2020 Olympic berths while they are awaiting for any advisory from the International Olympic Committee whether the Games will be pushed through amid the coronavirus disease (Covid-19) outbreak. (Photo by Macky Lim)

Ramirez, who was a guest at the Davao Sportswriters Association (DSA) Forum at The Annex of SM City Davao Thursday, said the International Olympic Committee (IOC) is still watching the development of the coronavirus.

“Our position is to await a formal announcement from the IOC but we have prepared for the worst (scenario),” he said. But since there is still no cancellation advisory on the world’s premier sports spectacle, then, there will be no letup in the preparation of the country’s elite athletes who are still aiming for Olympic berths.

He also said they have been monitoring the virus outbreak and only sent Filipino contingents to countries without Covid-19 for their foreign exposure training and to join Olympic qualifying tournaments.

Rio Olympics silver medalist Hidilyn Diaz, who recently struck for three gold medals in the 2020 Roma Weightlifing World Cup, is currently ranked fifth in the International Weightlifting Federation (IWF) women’s 55-kilogram class. Although such feat already should have entitled Diaz for an Olympic slot, Samahang Weightlifting Pilipinas president Monico Puentevella, in an Inquirer report, however, said lifters needed to compete in six events to make it to Tokyo.

The Roma stint was Diaz’s fifth qualifying tournament. She and the rest of the national weightlifting team will still compete in the final qualifying leg 2020 Asian Championships slated April 16 to 25 in Nur-Sultan, Kazakhstan.

Ramirez said Obiena,Yulo, and Diaz were each given a team composed of psychologist, physiologist and nutritionist, among others, to beef up their Olympic preparations.

The PSC chief added, “We have the P100 million budget of the President (Rodrigo R. Duterte) to focus on our target of 20 Filipino athletes for the Olympics.”

Based on records, Ramirez said Diaz has the strongest chance to win the country’s coveted first Olympics gold after her silver in Rio Olympics and golds won in Asian Games, SEA Games and in the 2020 Roma Weightlifing World Cup. Since Russia was banned from the Olympics and other international competitions over a doping cover-up while the participation of China, Thailand and South Korea may be affected due to Covid-19, Ramirez said Diaz might pull off a golden performance in the Games.