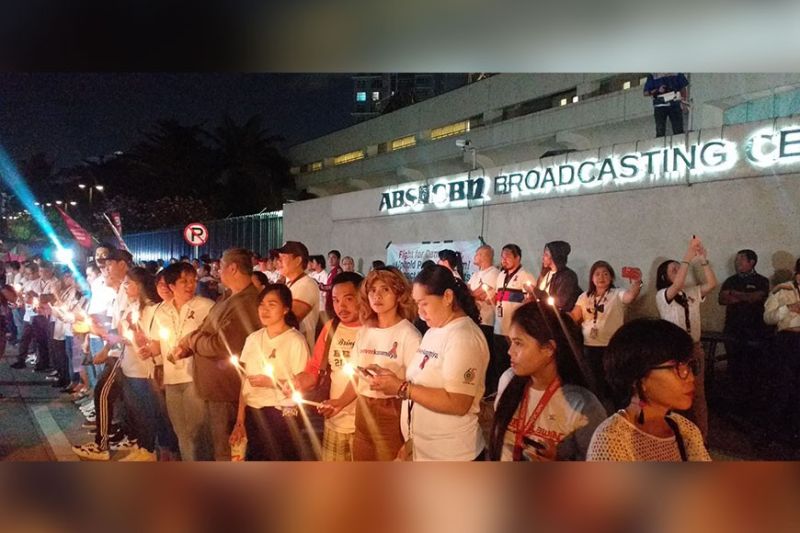 ABS-CBN regional station employees in Mindanao, together with the National Union of Journalists of the Philippines (NUJP), will stage a candle lighting vigil on Friday, February 28, as part of its call for the renewal of the network’s franchise, set to expire on March this year.

NUJP said in a forwarded press release that the group together with the network employees will have the vigil in front of all ABS-CBN Mindanao stations in Friday afternoon.

The union group said it is part of the “Black Friday protest” which was organized to show support and solidarity with the network’s employees “who are facing an uncertain future with the non-renewal of their franchise”.

The group also called the network’s loyal viewers, press freedom advocate groups, and other human rights defenders to stand with ABS-CBN in its battle against its tenure security.

NUJP, earlier this year, had also staged the Black Friday Protest around the ABS-CBN compound in Quezon City.

This is in response to the pending shutdown of ABS-CBN after the Congress has not yet up tackled the several pending bill granting the network an extension of another 25-year franchise.

On February 21, ABS-CBN’s celebrity talents had also joined the protest, calling the government to renew the network’s franchise.

Davao City Mayor Sara Duterte-Carpio, meanwhile, expressed her support for the franchise renewal of ABS-CBN Corportation, a day after President Rodrigo Duterte accepted the network’s apology over the airing of a 2016 election ad against him.

The mayor said the Kapamilya network has made an impact not only for the Dabawenyos, but also the entire country.

“Of course malaki din ang suporta ng ABS-CBN sa Davao City at sa buong bansa (Of course, ABS-CBN has made an impact not only for Davao City, but also the entire country),” Duterte-Carpio said.

The President’s daughter said she is hopeful that issues surrounding the franchise renewal of the Kapamilya network will be resolved “in a very positive way.”

However, she said it is better to await the decision of the Congress and the Supreme Court ruling.

But she guaranteed that the President will not allow the network’s employee to lose their job.

The presidential daughter made her remark a day after President Duterte accepted the public apology issued by the Lopez-owned media conglomerate for airing a smear ad against him funded by defeated vice-presidential candidate and former Senator Antonio Trillanes IV.

During the Senate hearing Monday, February 24, into ABS-CBN’s compliance with the terms of its franchise, ABS-CBN chief executive officer Carlo Katigbak also apologized for the network’s failure to air about P7 million worth of campaign ads from Duterte, a Davao City mayor who ran for President in 2016 and won.

Katigbak said the network refunded about P4 million to Duterte.

The ABS-CBN official issued the apology after Senator Christopher “Bong” Go, a former aide of the President who still accompanies him to some official and private events, said Duterte was hurt and dehumanized by the airing of a video that maligned him.

The video was paid for by the camp of former senator Antonio Trillanes IV, one of the President’s most vocal critics. It showed children questioning Duterte who issued a death threat and cursed the pope, among others.

Duterte secured a temporary restraining order from a regional trial court to stop the airing of the video.

The Presidential, meanwhile, said despite accepting the network’s apology, he said he could not do anything to stop the quo warranto petition filed by the Office of the Solicitor General (OSG) against the television network.

The petition, which seeks to revoke the legislative franchise of ABS-CBN, is scheduled to be heard by the Supreme Court en banc on March 10, 2020.

Meanwhile, the lower Congress, who legislates and grants franchise authority to television and radio companies, has yet to tackle several bills seeking the renewal of ABS-CBN’s license to operate, which expires in May.

ABS-CBN, who has been operating for 65 years, claimed that the network shutdown might lose 11,000 regular and project employees, and on-cam talents. (With reports from SunStar Philippines)