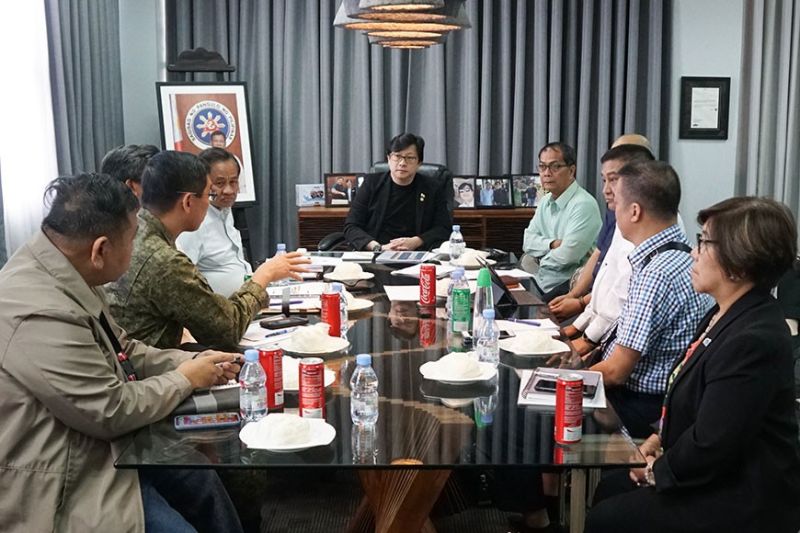 MEETING. Presidential Assistant for the Visayas Michael Lloyd Dino (at the head of the table) presides the meeting with the representative of the member-agencies of the Regional Task Force to End Local Communist Armed Conflict on Feb. 11, 2020. (Contributed Photo )

PRESIDENTIAL Assistant for the Visayas Michael Lloyd Dino asked all the 12 clusters of the Regional Task Force to End Local Communist Armed Conflict (RTF-ELCAC) to submit all their project proposals for 2021 on Friday, Feb. 21, 2020.

This is to plan out and prepare the said projects on ELCAC efforts to be submitted to the joint Regional Development Council-Regional Peace and Order Council meeting this March.

The deadline was set to comply with the deadline put in place by the Department of Budget and Management (DBM) in the National Budget Memorandum Circular 133 issued last December 2019.

Dino, who is the Cabinet Officer for Regional Development for Security (CORDS) in Central Visayas, called for a meeting with the member-agencies of the RTF-ELCAC last Feb. 11.

He asked all the members of the 12 clusters to submit their project proposals based on the issues and concerns raised by the identified conflict-affected and vulnerable barangays.

Currently, there are 16 identified conflict-affected and vulnerable barangays in Region 7 which are all located in Negros Oriental.

During the meeting, the Secretary thanked all agencies that have contributed to the successful implementation of President Rodrigo Duterte’s Executive Order 70, which was issued in 2018 to institutionalize “the whole-of-nation approach in attaining inclusive and sustainable peace, creating a national task force to end local communist armed conflict, and directing the adoption of a national peace framework.”

He also made a special mention of the efforts of the Department of the Interior and Local Government (DILG) 7 for completing the series of “Dagyawan sa Barangay: Talakayan at Serbisyo sa Mamamayan.”

During the Feb. 11 meeting, Assistant Secretary Anthony Gerard Gonzales of the Office of the Presidential Assistant for the Visayas was also designated by Dino as the chairman of the RTF 7-ELCAC technical working group (TWG).

The TWG will ensure that the plans, programs and projects for the conflict-manageable and development-ready communist terrorist groups-affected areas will be endorsed accordingly for budget allocation and implementation.

They will also conduct site visits of the listed projects as part of the monitoring of the ongoing implementation of ELCAC interventions for 2020.

Included in the list of proposals are the projects that will be launched or inaugurated by March of this year. S