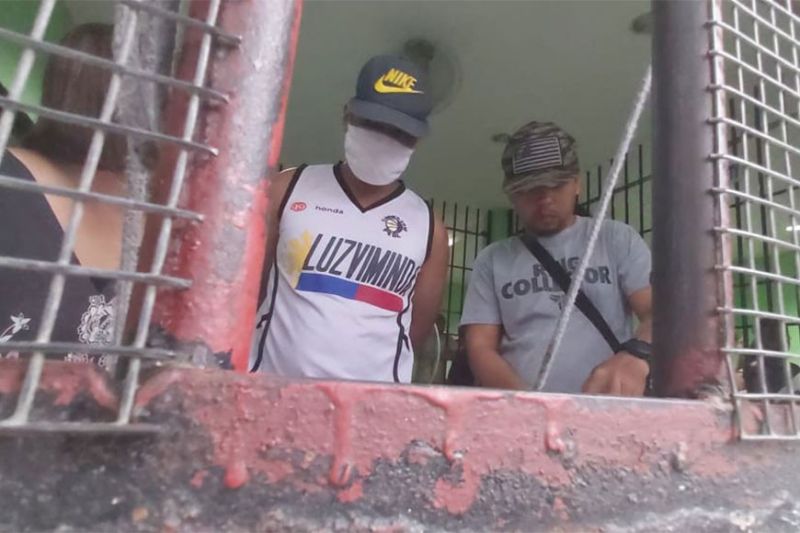 FIREARMS THEFT. P/Cpl. Marlito Portugueza (face covered), a member of the Waterfront Police Station in Cebu City, was arrested for reportedly stealing 12 guns that were placed under safekeeping at the poilice station while their owners were processing their licenses. (Sunstar Photo / Alan Tangcawan)

A MEMBER of the Cebu City Waterfront Police Station was arrested by his fellow Waterfront police officers after he was identified as the one who stole 12 firearms surrendered to the station for safekeeping while the guns’ owners were renewing their licenses.

P/Cpl. Marlito Portugueza, an assistant investigator and a resident of Deca Homes in Barangay Dumlog, Talisay City will be facing robbery and administrative charges for the theft of the firearms.

P/Maj. Joemar Pomarejos, chief of the Waterfront Police Station, said one of the gun owners visited the police station last Wednesday, Feb. 26, to retrieve his gun after his license had been renewed. However, when the custodian checked the locker, the guns were no longer there.

Pomarejos immediately conducted an inventory of the firearms and found that all the 12 firearms had disappeared from the police locker.

The police official then summoned all his personnel to a probe and learned of Portugueza’s role in the loss of the guns from a police “striker” (a person who does chores in the police station) who said he saw Portugueza stealing.

After probing Portugueza about the missing firearms, he reportedly admitted to stealing the firearms last January.

A follow-up operation was conducted by the Waterfront Police Station together with the IMEG 7.

Six of the missing firearms were retrieved after they were sold to a “civilian” in Barangay Tinago, Cebu City.

Pomarejos said they will continue to search for the other six missing firearms.

Portugueza refused to comment on the matter, but his lawyer told reporters the police officer denied the allegations against him.

Portugueza joined the police organization in 2011. He later became a member of the Drug Enforcement Unit (DEU) at the Waterfront Police Station before becoming assistant investigator.

Pomarejos removed Portugueza from the DEU after he suspected the latter was involved in illegal activities.

Cebu City Police Office (CCPO) officer-in-charge P/Col. Engelbert Soriano said he was disappointed that there are still erring cops in the CCPO just as they are trying to clean up the ranks of the police organization.

Soriano ordered Pomarejos to remove Portugueza from his post and transfer him to CCPO’s personnel holding accounting unit.

Soriano also reminded all police stations to conduct a regular inventory of the firearms that had been turned over by gun owners trying to obtain new licenses as well as evidence seized during police operations against illegal drugs and gambling. (AYB / RSR)