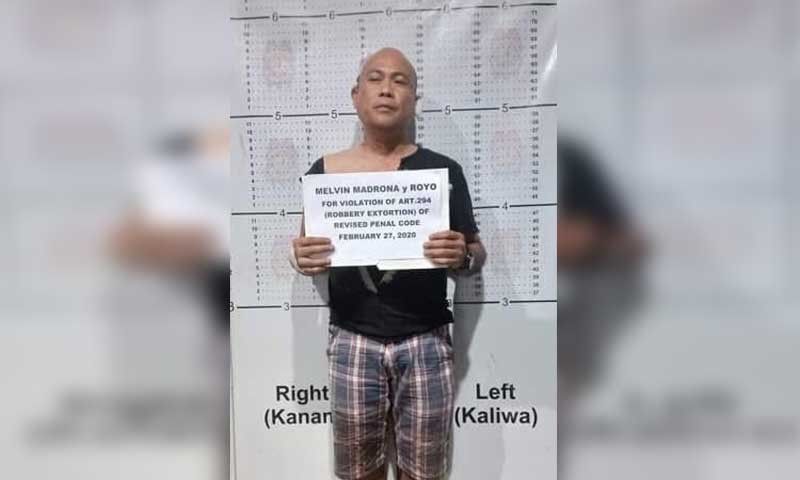 BACOLOD. Police Major Melvin Madrona, chief of the Criminal Investigation and Detection Group in Bacolod City, is booked for extortion. (Photo from IMEG)

PHILIPPINE National Police (PNP) counter-intelligence operatives have arrested the chief of the Criminal Investigation and Detection Group (CIDG) in Bacolod City for allegedly receiving “protection money” from a KTV bar, a police official said on Friday.

Major Melvin Madrona was arrested in an entrapment operation conducted at 5:35 p.m. on Thursday, February 27, in a cockpit arena in Mansilingan town.

PNP-Integrity Monitoring and Enforcement Group (IMEG) chief Colonel Ronald Lee said Madrona was collared after receiving P5,000 from the complainant, who said that the official has been demanding the same amount each week “in exchange for their unhampered operations."

Also arrested during the operation was Jay-R Dela Cruz, a fighting cock handler who also allegedly serves as Madrona’s cohort.

The complainant said the demand was made after CIDG operatives raided their KTV bar and brought them, along with their employees and customers, to the CIDG office on the evening of February 8, 2020.

The bar owners said they were later released but they were made to promise that they will give the CIDG P5,000 every Thursday.

Lee said the complainants first gave P5,000 to a certain Senior Master Sergeant Nabarte on the instruction of Madrona on February 20, 2020.

Lee said Madrona also allegedly asked the complainant to pay for his travel expenses and hotel accommodation on top of the grease money.

Madrona, who was assigned at the Quezon City Polioce District Station 5 in 2017, was charged then with physical injury, arbitrary detention and grave coercion after allegedly beating up an overseas Filipino worker in a police station.

The mauling was caught on closed circuit television (CCTV).

Madrona and Dela Cruz were brought to the IMEG office in Camp Crame for the filing of robbery and extortion case against them.