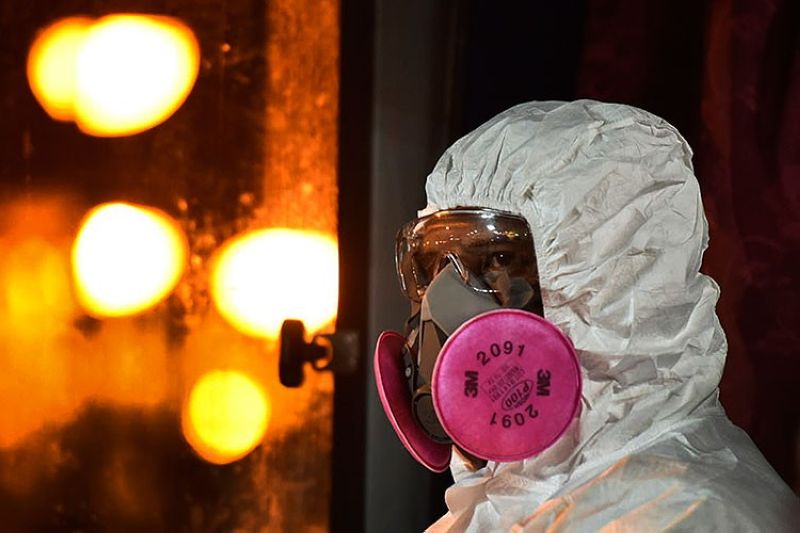 MALAYSIA. In this photo released by Malaysia's Ministry of Health, a health worker wearing a full protective suit waits for the arrival of evacuated Malaysians from China's Wuhan, the epicenter of the new coronavirus outbreak, at Kuala Lumpur International Airport in Sepang, Malaysia, Wednesday, February 26, 2020. (AP)

A TOTAL of 85 overseas Filipinos have been infected with the new virus that causes the coronavirus disease (Covid-19), the Department of Health (DOH) announced Friday, February 28, 2020.

DOH Secretary Francisco Duque III said Japan recorded the most overseas Filipinos with Covid-19, with a total of 80. Of the number, 70 have been admitted in hospitals in Japan and 10 were already discharged after testing negative for the virus.

Duque said eight of the 10 discharged Filipinos are already in the Philippines.

"They're back in the country. They need not be quarantined since they tested negative but they will be monitored by the surveillance officers," he said in a press conference Friday.

The 80 Filipinos were among those onboard the M/V Diamond Princess cruise ship that was earlier quarantined for 14 days in Japan after some of its passengers developed symptoms and eventually tested positive for the new virus.

Aside from Japan, the United Arab Emirates and Hong Kong reported two cases each, while Singapore has one positive case, all involving Filipinos.

The latest confirmed case involving a Filipino was reported in Hong Kong, after a 29-year-old Filipina tested positive for Covid-19. She is currently in isolation in a hospital, said the Department of Foreign Affairs (DFA) on Thursday, February 27.

The first case in Hong Kong, on the other hand, is set to be released this week, provided that her test results remain negative for the disease, the DFA added.

"Covid-19 continuously affect our kababayans overseas. The Philippine government remains at their service and would devotedly extend our assistance wherever they are in the world," said Duque.

He added that according to the World Health Organization, the novel coronavirus infection has spread to 37 countries outside China, where the virus originated.

But he said the DOH is happy to know that the Philippines is among the nine countries in the world with no new cases of Covid-19 for more than two weeks.

The DOH also reported that as of 12 p.m. Friday, February 28, at least 30 patients have been placed under investigation for the disease, while 585 patients have already been discharged. A total of 531 patients have tested negative for the new virus.

"Hopefully that trend continues," Duque said, adding that the DOH and concerned agencies are doing everything to keep the Covid-19 at bay.

He said the country's preparation for the disease is adequate, noting that all health facilities are well-equipped and prepared to handle positive cases. (LMY/SunStar Philippines)