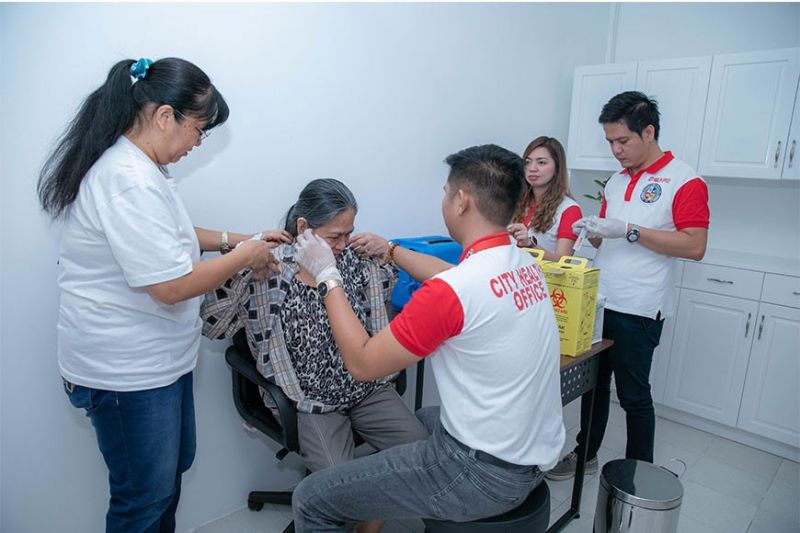 ANGELES. City Health Office staff attend to an elderly during the opening of the Puso Center which aims to make Angeles the most caring city. (Contributed photo)

MAYOR Carmelo “Pogi” Lazatin, Jr., wants Angeles to be known as the “most caring city” under his watch as he launched the Puso Center on Thursday, February 27.

During the inauguration ceremony, Lazatin said the Puso Center will prioritize the well-being of Angeleños, especially those who belong to the indigent and marginalized families.

(We will strive so that Angeles will be recognized as the “most caring city” because it’s very important that healthcare programs are inclusive.)

According to the mayor, the center will cater to addressing concerns on health such as minor surgery, animal bite treatment, and dental problems where all services are free of charge.

Regular operation “tuli” (circumcision) and free tooth extraction will also be conducted at the said center. In April 2020, there are 3,000 target beneficiaries for operation tuli.

(We are fortunate to have the Puso Center in our city. This is a three-in-one clinic which will give immediate services on treatment for animal bite, minor surgery, and dental care. All services are free to the public.)

Angeleños, upon hearing the opening of the said center, which was announced via the City Information Office Facebook page, expressed their gratitude to the administration for extending accessible health service.

According to Leoncia Penullar, a netizen who commented on the said post, “this is a wonderful project that will help many poor people.”

For Liezel Garcia, a city hall employee, the Puso Center is a testament of the City Government’s commitment in ensuring health and welfare of its constituents.

Meanwhile, Lazatin mentioned a part of the city’s budget surplus will be allocated for his health programs where he shared his intention to improve the Rafael Lazatin Memorial Medical Center (RLMMC), also known as Ospital Ning Angeles (ONA).

In addition, Lazatin reminded the health staff to extend maximum tolerance to everyone who will visit the center.

He also said to stay at their respective posts during office hours to assure that all health concerns will be addressed.

All medicines in the respective Rural Health Units (RHUs), according to the Mayor, will always be available to Angeleños.

(I hope there will be no complaints about services being unavailable because there’s no doctor or health staff.)

Lazatin also remembered his father, the late three-termer mayor and former Pampanga First District Representative Carmelo “Tarzan” Lazatin, since it was during his father’s stint that health services were accessible and readily available to the public.

(Just like my father who made way to promote free health services in our city, especially to those who are indigent, my goal is to continue and make it a priority in my term as Mayor of Angeles City.)