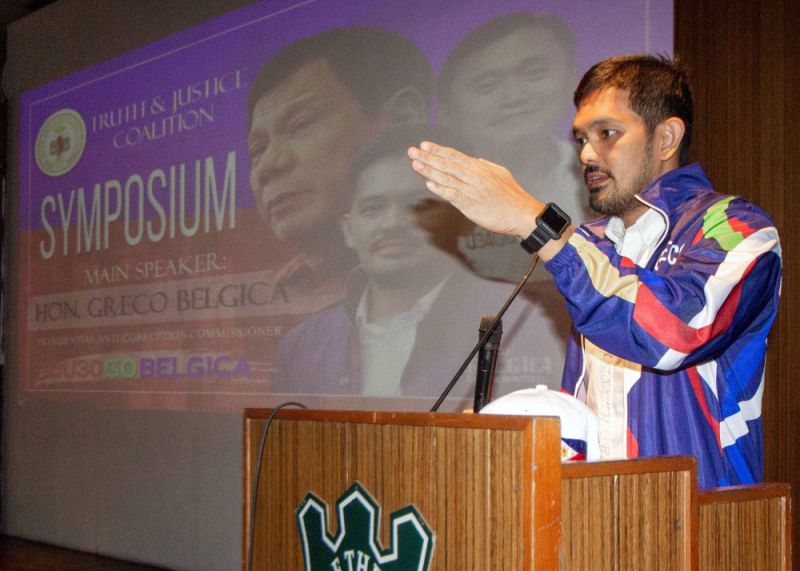 BAGUIO. Commissioner Greco Bellica of the Presidential Anti-Corruption Commission speaks to students of the University of the Cordilleras during the Truth and Justice Symposium Thursday, February 27. (Photo by Jean Nicole Cortes)

KATARUNGAN desk, a safe platform that aims to address all public-related reports regarding corruption, peace and order is being eyed in Benguet province.

Commissioner Greco Belgica of the Presidential Anti-Corruption Commission (PACC) in his visit in Benguet, Thursday, February 27, requested to Governor Melchor Diclas to enter into a framework for operational partnership, within which to establish collaborative efforts to combat and eliminate crime and corruption in all aspects of public administration through the Katarungan Desk.

“We in the national government are doing everything we can, firing undersecretaries, police, military officers who are involve in corruption, extortion, red tape. We are seeking LGUs to help us fight corruption at mapagtulungan po namin ang mga local government issues,” he added.

Belgica said the project was launched in Malacañang in 2019 in several cities in Metro Manila while at present they are going around the country, urging government offices to establish a Katarungan Desk.

Moreover, Belgica said they will be giving out free mobile applications intended for concerns of people in the government and non-goverment to be addressed.

The official added there are corruption cases in the region, however, he has yet to disclosed details on the cases.

Aside from Benguet, Belgica stated plans to go around provinces in the region to promote the establishment of a desk in their areas to strengthen fight against corruption.