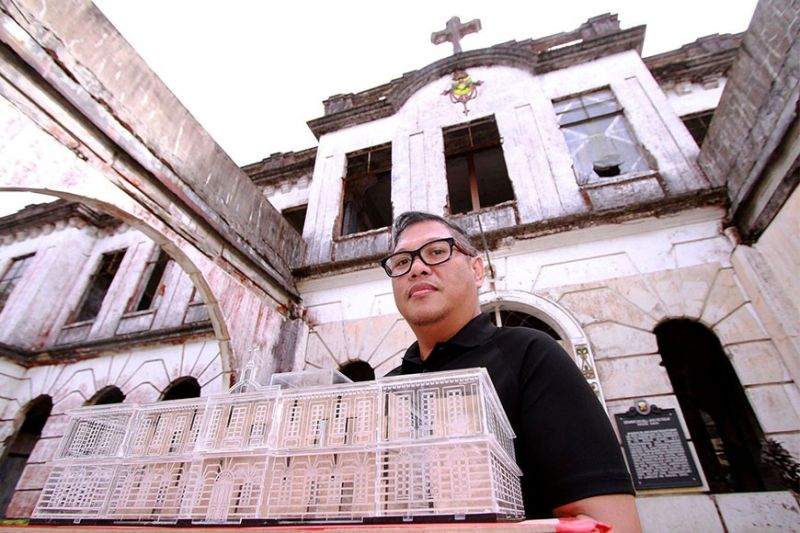 BAGUIO. Architect Gerard Lico presents the scale model of the Diplomat Hotel. Lico was in Baguio City to turn the century old Dominican retreat house into an art hub and creative space for Baguio artists and crafters. (Photo by JJ Landingin)

A CONSERVATION master plan for the Diplomat Hotel is underway.

Architect Gerard Lico with a team of conservation experts are on the process of creating a conservation plan for the Diplomat Hotel in the hope that its rehabilitation will proceed.

Lico’s team was in the city to assess the condition of structure as well as help craft policies to ensure its historic significance is maintained.

Lico said modes of altercation but making sure the value of the building is kept intact for the local government to craft an action plan.

The architect was part of the team which led the conservation and restoration of the Metropolitan Theater and Rizal Memorial Coliseum and was invited by the Council for Baguio Creative City.

He presented the city a scale model his team has constructed using the original plans of Diplomat Hotel unearthed from the archives of the University of Santo Tomas crafted in 1911.

The architect added plans will be done by April and will be presented to the public for consultations and feedback including price for work.

Lico assured character and defining elements of the area will be preserved as well as the stability and safety of use.

Diplomat Hotel served as a vacation house for American friars of the Dominican Order following its construction in 1911 designed by Father Roque Ruaño, an architect.

During World War II, the people fleeing from the Japanese sought refuge at the Diplomat. The Japanese forces invaded the property and turned it into their headquarters, making it as the last bastion and garrison of the Japanese Imperial Army.

During the liberation of the Philippines in April 1945, the American forces bombed the place and partially hit the right wing of the building, between 1945 and 1947, the building underwent restoration.

Diplomat Hotels, Inc. acquired ownership of the property in 1973 and remodeled thoroughly the interior into a 33-bedroom hotel but still retaining the unique features established by the Dominican friars.

The hotel was managed by Antonio Agapito “Tony” Agpaoa, a Baguio-based entrepreneur and faith healer famous for psychic surgery.

Today, the area is eyed to become a creative hub with the recent declaration of Unesco catapulting the mountain haven as a creative city for folk arts and crafts.

Lico said plans for the space will include multipurpose areas to accommodate the fields of the arts and become a people’s center.