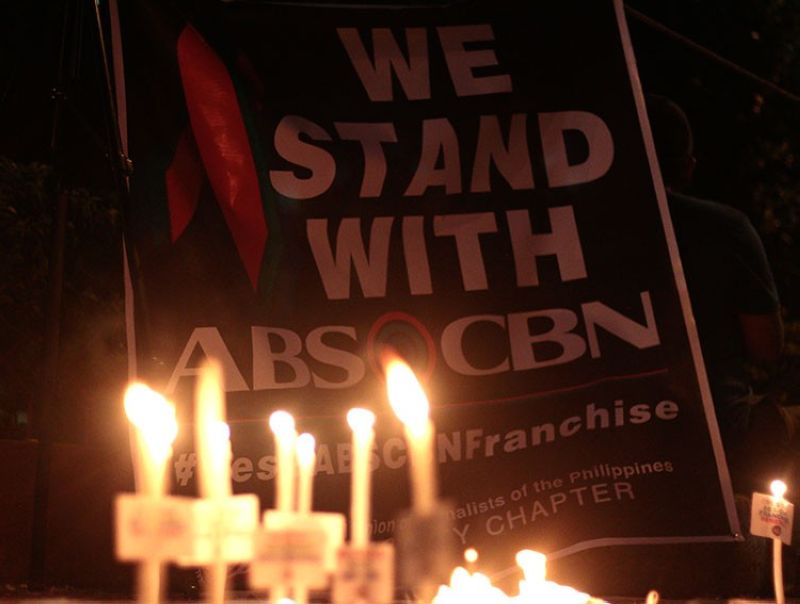 WITH ABS-CBN's broadcasting operation still uncertain following its franchise renewal remain pending in Congress, the National Union of Journalists of the Philippines (NUJP) will continue its Black Friday protest nationwide until the government acts on it.

NUJP national directorate Kath Cortez, during the protest rites, said they are continuously calling for the government, particularly the House of Representatives, the Senate, and other concerned government agencies, to grant the network another 25-year franchise operation for the sake of the 11,000 employees nationwide, both regular and contractual.

Cortez said the delaying tactics in ABS-CBN's franchise renewal is an attack against press freedom, not only in the media community, but for the entire Filipino.

Despite several bills already pending in Congress, she said it is alarming that the broadcasting firm’s franchise renewal is not being prioritized considering it is set to end in March 2020.

(We must pressure the government, especially those politicians who have the legislative authority and other concerned agencies, to look into the job security of our fellow comrades in ABS-CBN especially now that the network's franchise is nearing its end, and the congress would barely be able to include it in their agenda as they will be having a Congressional break.)

She added the issued Quo Warranto petition filed by the Office of the Solicitor General (OSG) against the network is a blatant and arrogant show of abuse of power and authority.

As of now, Cortez said they are planning to do the Black Friday protest weekly until there would be positive development with ABS-CBN's franchise application.

NUJP initiated in January 2020 the protest in front of ABS-CBN's national headquarters in Sgt. Esguerra Avenue in Diliman, Quezon City as a solidarity to the network.

Meanwhile, employees of ABS-CBN Davao also had its own activity.

In some online posts, the local network employees conducted their own candlelight vigil inside the compound, wearing a white t-shirt with a #foreverkapamilya and a red, blue, and green ribbon print design symbolizing the networks color trademark.

An ABS-CBN Davao employee, who opted not to be named due to the temporary restraining order issued by the Supreme Court, said the management is thankful for the support of the NUJP and some of their viewers who voiced out their support.

ABS-CBN chief executive officer Carlo Katigbak apologized recently to President Duterte for the network’s failure to air his P7 million worth of campaign. Duterte was a former Davao City mayor who won the presidency in 2016.

Katigbak also apologized for airing a political advertisement paid for by the camp of former senator Antonio Trillanes IV, one of the President’s most vocal critics, showing children questioning Duterte who issued a death threat and cursed the pope, among others.

Duterte already accepted the network official's apology, but he said he could not do anything to stop the quo warranto petition filed by the OSG against the television network.

The petition, which seeks to revoke the legislative franchise of ABS-CBN, is scheduled to be heard by the Supreme Court en banc on March 10, 2020.

Duterte-Carpio said her constituents in Davao City are in favor of ABS-CBN's renewal.

The President’s daughter said she is hopeful that issues surrounding the franchise renewal of the Kapamilya network will be resolved “in a very positive way.”