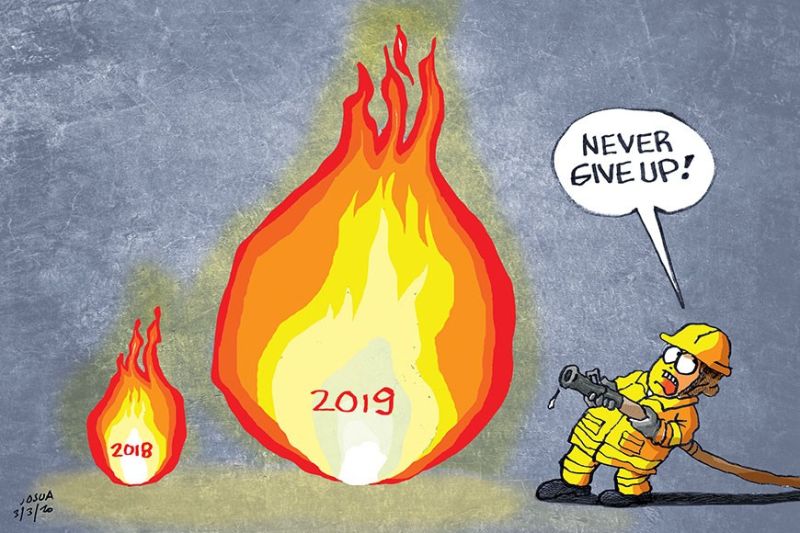 FIRES are persistent news and their frequency have turned them, it seems, into a fact of life. Every once in a while, newsrooms hold their breath each time firetrucks blare by the city streets, rushing to yet another burning spot. By press time, photojournalists turn in breathtaking shots from a village fire, perfect angles of a beautiful blaze.

Except that fires at their core are heartbreaking and costly at worst.

Those staggering figures indicate that the BFP 7 lost in its battle and its dream of a zero-fire first quarter remains an ignis fatuus. Despite the agency’s intensified campaign to inform communities on fire prevention measures, it seems to be failing as far as getting public support and cooperation is concerned.

Last year, around 130 fires were caused by explosions of liquefied petroleum gas tanks or gas stoves, while 107 incidents were caused by overloaded power lines. These were causes easily preventable had households taken to heart cautionary measures.

Meanwhile, highlighting that defeat was February’s heartbreaking death of retired judge Gerardo Gestopa, his wife Louella and grandson Geric, from the Barangay Centro, Mandaue City fire. Although, this is not to say that the rest of the 1,319 blaze tales in Cebu weren’t as heartbreaking. Each story was a story of lost homes, of workplaces gone, displaced families.

A report presented in a Philippine edition of the International Fire and Security and Conference said the BFP is one of the most under-funded agencies in the country. We have a firefighter to every 2,000 people. With a Philippine population of 100 million, there is a need for at least 50,000 firefighters on field. In 2017, the BFP reported that it had around 2,343 fire trucks, while local governments units have 446.

However, while addressing these needs, the larger task still rests on the community. Without that culture of caution, the BFP can only do so much.

In all, what is most wanting is the kind of support the BFP needs in its campaign on fire prevention, at best the most cost-efficient stage if executed with success. What may be helpful as well is for media reportage to highlight each heartbreaking tale in every fire story, if that is one way to instill into public consciousness the cost of fire and apathy.