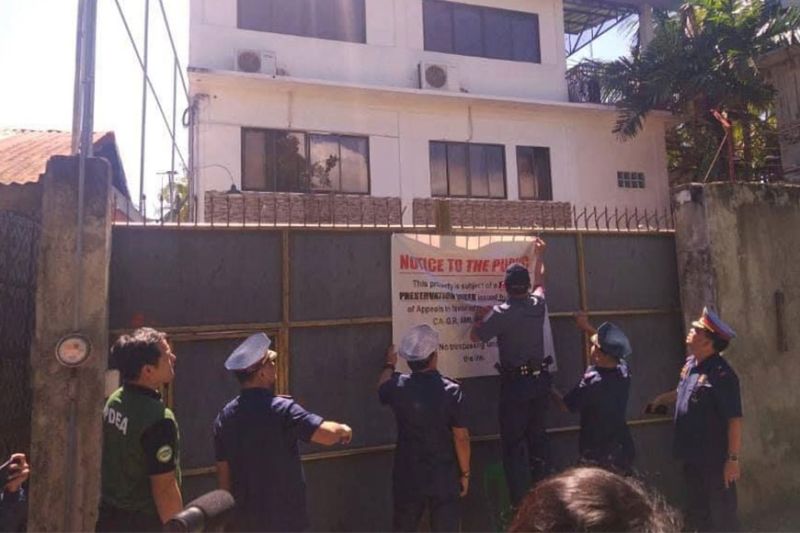 FREEZING PROPERTY. Law enforcers implement the freeze order issued by the Court of Appeals on one of the houses of alleged “drug queen” Jocelyn “Joy” Encila in Consolacion, northern Cebu on Monday, March 2, 2020. (Contributed Photo )

THE Court of Appeals (CA) has released an order freezing all the assets of alleged drug queen Jocelyn “Joy” Encila who was caught on March 3, 2019.

Past 10 a.m. Monday, March 2, 2020, the freeze order was served in the suspect’s three houses—two in Barangay Casili and one in Barangay Jugan in Consolacion town, northern Cebu. Each of the houses costs around P5 million.

Not the first time

This was not the first time the CA issued a freeze order on a suspected drug personality in Central Visayas. On Jan. 19, 2017, the CA 8th Division ordered the freezing of all Central Visayas self-confessed drug lord Franz Sabalones’ assets, amounting to P350 million. Sabalones was shot dead in Quezon City on April 18, 2019.

The law enforcers attached tarps to the gates announcing that the properties were the subject of the CA’s freeze order. It was former PRO 7 director, P/Maj. Gen. Debold Sinas, who asked the AMLC to investigate Encila’s properties.

According to Trijo, the implementation of the freeze order is part of their case seeking to forfeit the properties that they believe had been gained by Encila through an unlawful activity or money laundering.

Section 4 of Republic Act 9160, or the Anti-Money Laundering Act of 2001, states that “money laundering is a crime whereby the proceeds of an unlawful activity as defined in the law are transacted, thereby making them appear to have originated from legitimate sources.”

Encila, through her lawyer, has to prove that her properties were obtained through lawful means. She is on trial for drug trafficking.

“These properties can no longer be used by the owners or the relatives. That’s the essence of the freeze order. This is in full preparation for the ultimate filing of the civil forfeiture case,” Trijo said.

He further said: “After the completion of the civil forfeiture proceedings, in the event that the court finds preponderance of evidence that indeed the properties are related to drug trafficking, these will be forfeited in favor of the government and eventually turned over to the Bureau of the Treasury.”

Ferro said the two houses in Casili had been used as warehouses for shabu from Encila’s main source and former live-in partner, Rustico Repuela Ygot, a current inmate of the New Bilibid Prison in Muntinlupa City.

“These places are very ideal to hide contraband. They are located in remote areas and surrounded by high walls. I’m sure it had a lot of security cameras installed,” he said.

P/Maj. Gerard Ace Pelare, the former Consolacion police chief who led the operation against Encila, said no relatives of the suspect reside in the two houses in Casili.

Getalla, for his part, said the issuance of the freeze order showed the government’s seriousness in going after the properties of big-time drug personalities. (AYB / KAL)