Greenhills hostage crisis: How it happened 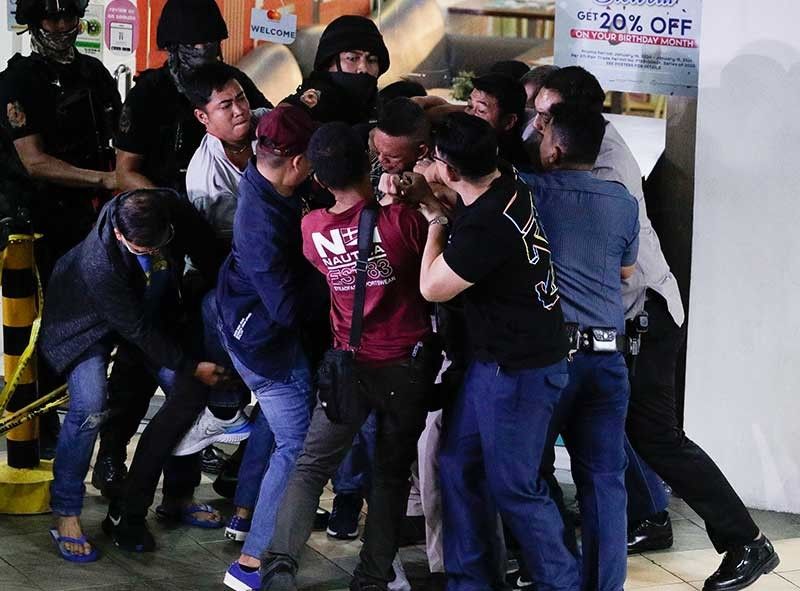 MANILA. Police subdue hostage taker Alchie Paray, center, shortly after releasing all his hostages at the V-Mall on Monday, March 2, 2020. Officials say Paray, a recently dismissed security guard, has released his hostages and walked out of the shopping mall, ending a hostage crisis that lasted almost 10 hours. (AP Photo)

THE Philippine National Police (PNP) Supervisory Office on Security and Investigation Agencies (Sosia) clarified on Tuesday, March 3, that the security guard who took hostage over 50 employees of the Greenhills Mall held a license to provide security services.

Brigadier General Michael John Dubria, Sosia director, also clarified that the suspect's name is Alchie, not Archie as he was identified by police earlier, Paray.

“The security guard is identified as Alchie Paray y Pedrasa. So I was interviewed last night by dzMM and I was given the wrong name that's why I answered that the security guard was not in possession of a license to exercise security profession,” Dubria said in a press conference in Camp Crame Tuesday, a day after the hostage crisis at the V-Mall in Greenhills.

“But I stand corrected now because we just got a copy from the SPD (Southern Police District) for the NCRPO regional director, it was not official yet but I saw the name, so the name is Alchie so he is in possession of a license to exercise security profession to expire on 2021,” he added.

Dubria said the firearm found in Paray’s possession was illegal. It did not have a serial number and was not issued by Paray's employer, Sascor Armor Security Corporation.

Dubria said the security agency is a legitimate company which has a license that is set to expire this month.

However, he said they will still conduct an investigation to determine possible liability.

"They have a license to operate. They employ licensed security guards. I think for the administrative matter, at first glance, wala silang liability. But, that did not prevent me from ordering an inspection for all the post of all the private security agency such as the SASCOR," Dubria said.

Paray, 32, tried to convince the other security guards to join him, but no one followed him.

Paray then proceeded to the administrative office on the second floor of the mall and shot Ronald Beleta, not Vileta as identified by the police earlier.

Beleta, officer-in-charge of the mall, sustained a gunshot wound in the chest and was rushed to the Cardinal Santos Memorial Medical Center.

Paray then declared that he was taking all the employees inside the administrative office hostage.

There were a total of 55 people in the office at the time. But some managed to hide in the pantry and kitchen.

Major General Sinas said they were able to rescue earlier Monday those who were hiding without the suspect noticing it.

When Paray agreed to surrender at past 8 p.m. Monday, there were still about 30 hostages left. All were released unhurt.

During the ordeal that lasted almost 10 hours, Sinas said Paray demanded for food and water for his hostages.

Quoting some of the hostages, Sinas said Paray had given all the food to his hostages while he had only candies and cigarettes.

Sinas also said Paray had assured his hostages that he had no intention of hurting anyone. He simply wanted to be heard.

During the negotiation, Paray demanded only that he speak with the media and his fellow security guards.

Authorities gave in to the demand. They believed Paray's claim that he was carrying a gun and four grenades. Paray later admitted to having only one grenade.

To appease Paray, security officers of the mall and officials of Sascor held a press conference and apologized to Paray for their shortcomings. They also declared that they were willing to resign.

Paray was monitoring the press conference via video call. He questioned his superiors, particularly on what he claimed to be corruption inside the mall.

At a little past 8 p.m. Monday, Paray finally gave in and freed the hostages, who formed a line and piled out.

Paray, who was clad in a black T-shirt and denims, emerged last and raised his hands.

Speaking before the media, Paray said he had agreed to leave the grenade behind. He was, however, seen carrying a gun in his waist.

Inside the office, Sinas said his men searched for the grenades, but found only three star apples inside a plastic bag.

As the search was carried out, Paray was allowed to speak freely before the media.

He accused his superiors of corruption and of looking down on him and other security guards.

He spoke of a corrupt system prevailing in the mall which allowed some tenants to bribe the security officials into circumventing mall policies.

Paray said he had planned the incident and was prepared to suffer the consequences.

San Juan City Mayor Francis Zamora said he was the one who encouraged Paray to surrender and end the crisis by assuring him that he will be able to get out of the building alive.

Zamora said they had asked Paray’s pregnant wife to travel from Guagua, Pampanga to Greenhills in the hope that the suspect would soften at the sight of his wife.

Paray was still speaking when police suddenly swooped down on him and subdued him. He was disarmed and arrested.

He was brought to the San Juan City Police Station where he underwent booking procedure.

Charges of frustrated murder, illegal detention and an illegal possession of firearms and explosives are being prepared against him.

Zamora said Paray had “simple wishes”. He said the security agency even offered to give him P1 million in exchange for his surrender. Paray refused.

“He just wanted to be heard that is why we gave it to him,” he said.

Sinas said it was all part of their strategy to end the crisis peacefully and without any casualties.

“There was even a question there why allow him to go on a press conference but ako I would already tell you that the reason behind there is tactical. Alam nyo probably very open tayo but you must understand also that in some aspects of some police operations just like in the military we cannot divulge everything kasi alam nyo kapag dinivulge even there is a critique on us presenting our procured equipment kasi hindi ba alam na ng kalaban kung ano ‘yung capability namin, alam na ng kalaban kung ano ang paraan and remember like crisis management of this sort would happen from time to time and if we reveal our tactical secrets how can we be more effective if needed,” he said in a press conference in Camp Crame.

“So I hope you would understand but again bakit nagkaroon ng press conference. The reason

is tactical which we cannot divulge and I hope the public would understand,” he added.

V-Mall, which was evacuated and placed on lockdown during the crisis, resumed operations Tuesday. (SunStar Philippines)