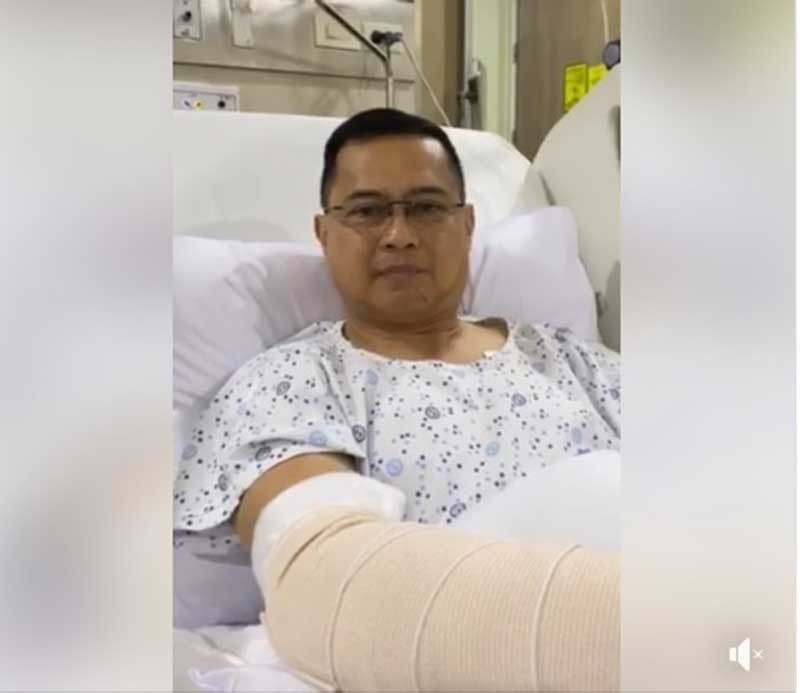 PHILIPPINE National Police (PNP) Chief Archie Gamboa assured that he is fine and that he will be going back to work on Monday, March 9, as he warned against the spread of photos of the helicopter crash in Laguna.

“Sa ating mga kababayan at lalo na sa ating mga kapulisan. Ako ay lumabas ngayon dito para ipakita sa inyo okay ako, hindi naman ako nasaktan and as a matter of fact I am going back to office on Monday,” he said in a video message posted on Facebook around 12 hours after he figured in a helicopter crash.

Gamboa and seven other PNP personnel, including three other generals, were on board a brand new helicopter when it crashed in San Pedro, Laguna after hitting a power line at around 7 a.m. Thursday, March 5, 2020.

Gamboa, Gayrama, Banac, the two pilots and the crew sustained minor abrasions and blunt injuries in the face and in the arms. They are now safe but are still under observation at the St. Luke’s Medical Center in Taguig City.

Magaway was transferred to the Asian Hospital in Muntinlupa from Unihealth Southwoods Hospital and Medical Center (USHMC) in Biñan City in Laguna, where they were initially brought for initial treatment. He is already in stable condition but he is still unconscious.

Ramos has yet to be transferred to a bigger hospital because his condition remained unstable as of Thursday night.

"The two were now critical in condition and (Ramos) placed in ICU while the other placed in Critical Care. He was dissuaded by the doctors under observation pa rin po sila all examination napagdaanan na po nila. The next 48 hours will be critical," said Major General Benigno Durana Jr., PNP director for Police Community Relations and acting spokesperson.

“At this point we are not (aware of the) extent of the nature of injury they are still on unstable condition unstable ang kanilang condition nagre-respond si Magaway sana tuloy-tuloy na ito we storm heaven with our prayers,” he added.

Earlier, Doctor Elvis Bedia, President of Unihealth hospital has sustained serious injuries in the face and that he has to undergo blood transfusion and surgery.

While the two generals were in critical condition, Durana said the PNP Chief assigned Brig. Gen. Ronnie Olay and Brig. Gen. Jesus Cambay as the officers-in-charge of the Directorate for Comptrollership and Directorate for Intelligence, respectively.

Meanwhile, PNP deputy chief for operations who was also assigned as the head of the Special Investigation Task Force to look into the incident, said they will be coordinating with the Civil Aviation Authority of the Philippines (CAAP) as well as the Philippine Air Force in the conduct of investigation. (SunStar Philippines)