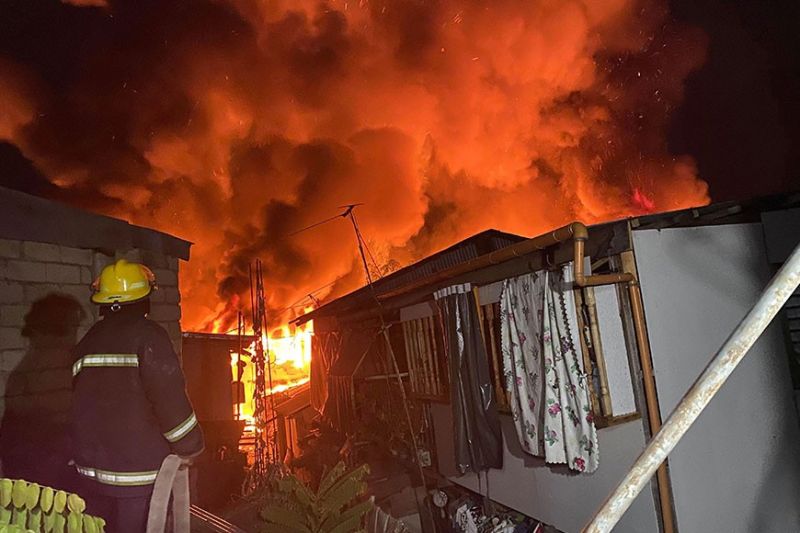 FLAMES OF DESTRUCTION. A firefighter stands helpless on a roof while staring at the flames burning red and raging in the interior portion of Sitio Ipil, Barangay Basak San Nicolas, Cebu City past 1 a.m. on Thursday, March 5, 2020. The blaze destroyed 66 houses and displaced 87 families. (Sunstar Photo / Benjie Talisic)

SFO1 Mariechiel Caburnay, who was tasked to investigate the incident, pegged the damage at P500,000. The blaze started in the ancestral house of the Estrella family, she said.

The Cebu City Fire Department received the alarm at 1:37 a.m. Firefighters controlled the flames from spreading to other structures at 3:18 a.m.

Caburnay said she has yet to determine the cause of the fire as the house was empty when the fire broke out.

The house’s occupant, Jonathan Estrella, 50, had gone out to the grocery before the incident happened, according to his sister Rosalina Labitan.

Caburnay said it took them two hours to put out the fire as the roads were narrow. Only small fire trucks were able to penetrate the interior portion of Sitio Ipil. Firefighters had to connect hoses to get the water to the sitio.

At 6 a.m., the City Social Welfare Services (CSWS) personnel distributed food to the displaced families who were temporarily sheltered at the Alumnos gym. As of Thursday, the CSWS said 87 families were affected by the fire.

CSWS officer in charge Jeffrey Ibones said they will provide meals for three days. Each of the homeowners will receive P20,000 in financial assistance, while each of the renters will get P10,000. ( BBT / RSR)